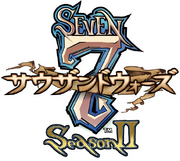 7: Thousand Wars ( サウザンドウォーズ, Sebun Sauzando Wōzu) was a freemium mobile social game released on October 20, 2011 by Namco Bandai Games and AdWays.[1] The game was based on the "Almethera Chronicle" from 7: Molmorth no Kiheitai, being considered "Season I" of the game. The "Season I" service ended in 2013, with only "Season II" being available afterwards. "Season II" is an update from August 21, 2012 that included new content, and its service ended on March 7, 2016.[2]

OVER-6 (Warrior Mage)
Add a photo to this gallery

Crystal
Add a photo to this gallery

Blood Boal
Add a photo to this gallery

Retrieved from "https://megaman.fandom.com/wiki/7:_Thousand_Wars?oldid=305718"
Community content is available under CC-BY-SA unless otherwise noted.