Acid Ace (アシッド・エース, Acid Ace) is the EM Wave Change form of Arthur C. Eos and his Wizard, Acid, in the Mega Man Star Force series. Using the Ace Program, they are able to Wave Change to form Acid Ace, and are registered under Project TC as No. 001.

Acid Ace is the first EM Wave Change form achieved via an artificial Wizard rather than an organic one, but a side-effect of this is that Ace's physical body is damaged over time. In addition, when Acid becomes corrupted with Noise, Acid Ace is capable of Finalizing into a berserk form called Acid Ace B (アシッドエースブラック Acid Ace Black).

Acid Ace is fought three times in the story - once where he cannot be damaged and the player must survive a few turns, a second time normally, and third when corrupted as Acid Ace B. Two other forms also exist, Acid Ace R and BB (ダブルブラック Double Black) [2] which are fought in the Black Hole Server and as a random Nintendo Wi-Fi opponent, respectively.

Acid Ace is a unique boss, being able to use different Battle Card attacks in succession, in addition to his own attacks. Due to the nature of his various attacks, he is capable of attacking the weakness of all elemental Noise Changes.

Acid Arrest, known as Acid Illegal (アシッドイリーガル, Acid Illegal) in Japan, is the Battle Card of Acid Ace on his out of control form. When used, Acid Ace appears and uses three random attacks, which include Acid Blaster, Dance Fire, Wide Wave, and Squall. Acid Arrest is a promotional Battle Card, being only available during 2008 events in Japan or with the DS Download Service in North America.[3]

The name Acid Ace holds the same possible references as the names of the wizard and human that make him, which are Acid and Arthur C. Eos, respectively.

Another possible reference drawn from Ace is the term flying ace, which is used to refer to military aviators who have succeeded in shooting down several enemy aircrafts, which is in direct relation to Acid Ace's shooting and semi-flight capabilities. 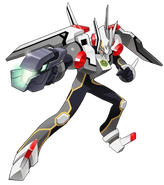 Front and back view.

Acid Ace when forced to go berserk by Joker. 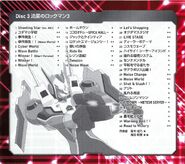