Absorbs damage at the expense of decreasing in size. When Power Gear is activated, it damages weaker enemies.

Note the barrier disappears when used on bosses, mid-bosses or stronger enemies.

Acid Barrier (アシッドバリア, Acid Barrier) is Acid Man's Special Weapon in Mega Man 11. It generates a large ball of acid around Mega Man that protects from projectiles. As long as the acid shield is up, Mega Man can also shoot arcing globs of acid. However, the shield shrinks over time, eventually dissipating, and if Mega Man takes damage from something other than a projectile, the shield dissipates immediately rather than blocking it.

Using the Power Gear, the shield becomes more durable, damages enemies on contact rather than dissipating, and will automatically shoot at enemies if a projectile hits it. Mega Man's manual acid shots also deal more damage.

Weapon Energy is only consumed when creating the barrier, it will not deplete when using the acid shots as they draw energy from the remaining power the shield has.

Just like the other Special Weapons in Mega Man 11, Acid Barrier gives Mega Man new Head Gear and Arm Gear that alters his physical appearance when equipped, rather than simply swapping his colors. The Head Gear is a helmet that encases Mega Man's head in green gel and features a respirator, much like Acid Man himself, and the Arm Gear is a buster that looks somewhat similar to Acid Man's.

This weapon is the weakness of Impact Man and both forms of Wily Machine 11 due the nature of themselves and the iconic sense of the weakness (acid melts the iron). 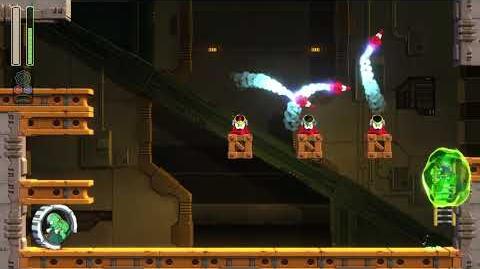