Acid Man (アシッドマン, Ashiddo Man) is a Robot Master who appears in Mega Man 11. Originally a chemist robot manufactured by the Mecha-Chuchets Institute of Robology, Acid Man was reprogrammed into a stereotypical "mad scientist" after being stolen by Dr. Wily; Acid Man now uses his chemistry skills to do Wily's bidding. He was also given a Speed Gear to boost his combat abilities. His Special Weapon, Acid Barrier, has the ability to generate a shield made of acid that not only protects him from all damage, but also lets him shoot globs of acid at enemies.

Acid Man is a stout Robot Master with a disproportionately thin lower body and outfitted with green and purple body armor. His right arm is a blaster and his head, which is encased in what appears to be green gel, resembles an acid drop. Acid Man constantly wears a breathing mask to protect himself from the noxious scents of the acid he uses in combat. In addition, transparent tubes are featured on Acid Man's body, armor, and legs. His feet are split into two digits, one in front and one in back.

Originally a robot with a wide knowledge of chemistry, Acid Man spends his time measuring every amount of chemicals stored inside various tanks. However, he is described to be a perfectionist and will throw a tantrum if any measurement is tampered with or ruined. Spending a lot of time swimming in chemical vats has earned Acid Man the nickname "Acid Merman."  He apparently doesn't like this nickname, as the other plant employees only ever call him that behind his back.

The fight with Acid Man begins in a chamber with a pool of acid underneath the floor. During the first stage of the fight, Acid Man will trigger his Acid Barrier. This barrier absorbs normal and charged Mega Buster shots and must be worn down with repeated shots. A Block Dropper shot will immediately break the barrier and stun him momentarily. While Acid Man is shielded with Acid Barrier, he will fire three shots in the air that arc towards the ground. Without the Acid Barrier, Acid Man will leap across the stage at Mega Man and pause to fire three acid shots from his arm that lightly track Mega Man's position. Wait for him to pause and fire and time jumps to avoid the shots.

The second stage of the fight will trigger Acid Man to utilize his Speed Gear. Acid Man will plunge into the acid pool underneath the stage and quickly move left and right. His position is marked by a large wave of acid that must be avoided as he moves. Once passing underneath Mega Man, Acid Man will jump from the acid and fire a volley of acid shots downward. Acid Man can fire a charged Acid Barrier during the second stage that requires more Buster shots to remove.

In the Superhero difficulty, Acid Man will fire four arcing shots instead of three, his Acid Barrier takes more hits to destroy, and he will fire much faster. In addition, the waves he creates when using his Speed Gear are much larger, and he fires more projectiles after leaping out of the acid pool. 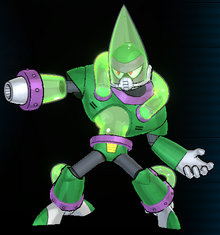 Acid Man is a cutting-edge scientist robot whose field is advanced chemistry. Ever the perfectionist, he ensures that all chemicals are measured out exactly; Sloppy mixing makes him absolutely furious.

He never hesitates to leap into the chemical tanks to check the mixtures, in turn, making him an excellent swimmer.

His reputation has led the plant employees to call him the "Acid Merman" behind his back. 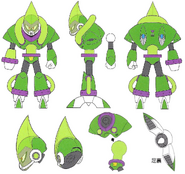 Retrieved from "https://megaman.fandom.com/wiki/Acid_Man?oldid=272818"
Community content is available under CC-BY-SA unless otherwise noted.