Adhering Suzy, also known as Octopus Battery and Octo Battery, is an adhering barricade robot that travels back and forth along the same path. They appear in Cut Man's, Bomb Man's and Ice Man's stages, as well as the second and third stages in Dr. Wily's Robot Manufacturing Plant from the first Mega Man game.

In Mega Man: Dr. Wily's Revenge they appear in the following areas:

They also appear in the first Wily Tower stage in Mega Man: The Wily Wars.

A barrier robot made to watch over dangerous locations. Watch its movements carefully, and then attack.

Amount of shots/hits from Special Weapons it takes to destroy a Suzy.

Giant Suzy (ジャイアントスージー, Jaianto Sūjī) is a boss from Mega Man III. It is a giant version of the Suzy that can travel in any direction and has the ability to jump.

Hunter (ハンター, Hantā) is the name of two mid-bosses from the Wily Battleship in Mega Man IV. They are modified versions of the Suzy.

The first Hunter bounces diagonally throughout the room and creates smaller duplicates of itself when it is damaged. The second Hunter spins along the surfaces of the room followed by one copy and shoots at Mega Man.

Suzy G (スージーＧ, Sūjī G) is a new version of Suzy in Mega Man 5. They appear in Gravity Man's stage and the second stage of Proto Man's Castle. They flip vertically when the player changes gravity in Gravity Man's stage. They can also shoot from the sides of their body, but the shots do minimal damage.

Amount of shots/hits from Special Weapons it takes to destroy a Suzy G.

Mega Man 10
R Suzy (Ｒスージー, R Sūjī) is a version of Suzy in Mega Man 10. It is similar to the original Suzy, traveling back and forth in the same location. They appear in Chill Man's stage, Pump Man's stage, Wily Castle 4 and Special Stage 1. They also appear in Wily Castle 3 on Hard Mode, but move a lot faster in this difficulty. The main difference is that R Suzy is darker in color and has a larger eye.

Displays the amount of damage in units that the Giant Suzy will receive from each Special Weapon in Mega Man III.

Displays the amount of damage in units that the Hunters will receive from each Special Weapon in Mega Man IV.

* For the Mega Buster and Pharaoh Shot, the first number is when the weapon is fired normally; the second is when it is fully charged.

Adhering Suzy and some of its varieties had brief appearances in Mega Man: Upon a Star, the Mega Man comic by Archie Comics, and in some manga. As Giant Suzy is a boss, it has the most prominent appearance, in the Rockman World 3 manga. 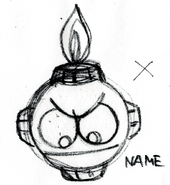 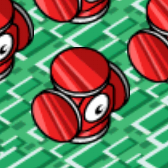 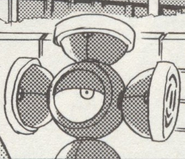 Suzy in the Rockman manga. 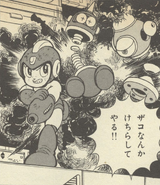 Suzy G in the Rockman 5 manga. 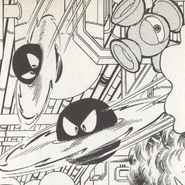 Suzy in the Rockman World manga.

A Suzy button in Worlds Unite.

Adhering Suzy in Mega Man: Upon a Star