The Advanced PET (アドバンスドペット, Advanced PET) is a PET model introduced in Mega Man Battle Network 4 and used up to the 34th episode of the MegaMan NT Warrior Axess anime series. It was used to combat Nebula and the Darkloids, as well as competing in the Red Sun and Blue Moon Tournaments.

This PET model looks much like a flip phone, the top has transparent glass so that even when closed the user can still see the screen. A sliding piece on the bottom causes the top to open, revealing the screen and buttons. Along the top of the device is a slot for Battle Chips, on the right side is a grip and on the left is a headphone jack. On the bottom underneath the slider is a port for charging. Unlike its predecessor, the Advanced PET comes in a wide variety of colors, and the NetNavi mark on the front can be customized as well. This PET introduced the concept of wirelessly jacking-in, which has been used in all PETs since. It is about 4 inches in length.

Lan Hikari gets this PET sometime before Mega Man Battle Network 4. Lan makes no mention of it in game (although a message board post mentions that Dr. Hikari and Mr. Famous designed it). New features include the Emotion Window, and changes in the Navi Customizer. The interface is mostly the same as in Mega Man Battle Network 3 with color palette changes. The Japanese exclusive Battle Chip Gate toy could also be used to send Battle Chips to MegaMan in real time during a battle, even if the Battle Chip isn't in Lan's Folder.

Booting up the Navi Customizer.

Lan Jacking into his PC.

The PET menu in the Blue Moon version.

The PET menu in the Red Sun version.

The PET menu changed by Mod Card 30.
Add a photo to this gallery

Introduced in MegaMan NT Warrior Axess, but first mentioned in episode 55 of MegaMan NT Warrior. The Advanced PET was made by IPC (Blaze Quest in the Dub) and was completed with the aid of Chaud and ProtoMan. This PET uses a Route-Mate Molecular 450 GHz processor which was long thought to be impossible. The Advanced PET became immensely popular in very little time with commercials for its still running up to episode 30. Pressing the Navi mark will shine a laser used to Jack-In. Unlike the games the interface is completely re-worked. In episode 34 Lan’s PET is heavily damaged and is replaced with the Advanced PET II in episode 36. Advanced PETs are still used in some episodes of Rockman.EXE Stream.

A commercial for the PET.

A dock for the Advanced PET.

Chaud sending Lan a chip via a gate device.

Lan's PET damaged.
Add a photo to this gallery

In the MegaMan NT Warrior Manga 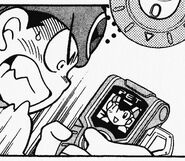 Lan talking to MegaMan.
Add a photo to this gallery

A redesign of this Advanced PET was produced in a cooperation between IPC and SiLab. Only one model was ever manufactured. In episode 29 of the Axess series the PET was first revealed with the purpose of preventing the use of Dark Chips. Later in episode 36, the PET was completed and given to Lan after his was damaged in a fight. While it is not known if the PET can prevent dark chips from being used, the Cross Fusion abilities of its user is greatly increased.  Lan continues to use this PET until he is given the Progress PET in episode 3 of Stream. This PET was used only in the spin off game Rockman.EXE 4.5 Real Operation, and is used by the player to control up to 21 net navis.

The Advanced PET II in the opening of the game.

MegaMan in the PET.

The initial design of the Advanced PET II.

Lan asking MegaMan a question with the cover on.
Add a photo to this gallery

Electronic toy versions of the Advanced PET have been distributed by Takara in Japan in 2003-2004 and Mattel in other countries in 2004-2005. The PETs simulate housing a virtual NetNavi that can battle with fictional computer viruses or other NetNavis, similar to digital pets. Various toy Battle Chips were also distributed for use on the PETs, either in packs or included with other toys, to fight "viruses". Two PETs can be connected with a link cable for NetBattles.

The Advanced PET comes in three different colors (MegaMan, ProtoMan and Bass, the latter being Japan exclusive), but this is purely aesthetic as they do not contain their respected Navis. There is also an Advanced PET II that includes new features, such as MegaMan being able to use Cross Fusion and Double Soul. The Battle Chip Gate was not released outside Japan. 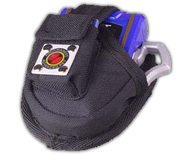 Retrieved from "https://megaman.fandom.com/wiki/Advanced_PET?oldid=351732"
Community content is available under CC-BY-SA unless otherwise noted.