Aeolus (ヘリオス, Heriosu, lit. "Helios") is the Biomatch for Biometal Model H and a boss character in Mega Man ZX Advent. He is fought in the Floating Ruins.

Model H grants Aeolus many superhuman abilities, such as wind manipulation, the ability to dash at super speed, and the ability to fly or hover for short periods of time.

Aeolus appears as a young man with pale skin and long silver hair with a pale green tint and a very thick, pointed fringe that covers one half of his face, which is characterized by a sharp, stoic expression. Like his fellow Mega Men, he wears the typical ZX Mega Man vest, but specific to only him, he wears a cape along the waist that is stylized in a way that somewhat resembles the coat Serpent wore. In game, he is always seen with a sword in hand (which is notably not of the plasma sort), however it is never used in battle. Interestingly, his ear pieces have been given earring-like attachments.

Due to Aeolus's hair style, which covers his forehead (the location of the possible red triangle identifying Reploids), it is impossible to tell if he is human/humanoid or Reploid.

Due to his status as a Mega Man, Aeolus has an arrogant demeanor and very much a narcassist. He behaves in a prideful manner to all whom he encounters, and deems the human race ignorant of their ways, and cites this as the root cause of all conflict; thus, he plays the Game of Destiny to rid the Earth of ignorance, in order to ultimately end conflict. It is therefore curious that he would cooperate with his Mega Man opponents, Atlas and Thetis in particular. Ironically, when stating how he intends to fight Albert regardless even after Grey and Ashe reveal that Albert used them, he ends up being decried as an idiot alongside the other Mega Men accompanying him.

In spite of his prideful attitude and misanthropist beliefs, he is somewhat touched by individuals sacrificing themselves for others, as evidenced by his remark to Model Z when the latter decided to take them on by itself to give Vent/Aile enough time to retrieve Ashe/Grey.

Aeolus makes his first appearance alongside Siarnaq after Grey/Ashe defeats Rospark and witnesses a Raider's soul being absorbed into Model W. Grey/Ashe prepares to do battle, but the two apparently have more pressing issues to attend to, instead taunting the inexperienced Mega Man before leaving with the Model W. Aeolus meets them again on the Floating Ruins and engages them in combat for the Model W that is disturbing the area's gravity, but is defeated, much to his dismay, and he vows to fulfill his goals before escaping with the Model W.

Aeolus appears next to the other Chosen Ones on one of Model A's ciphers (excluding Grey/Ashe). He appears once again to block the player's path to Albert on Ouroboros, along with Atlas, Siarnaq, and Thetis. Even with the revelation that he had been used by Albert, he is nonetheless confident that he can best all of his opponents and ultimately defeat Albert. However, a well-timed arrival of Aile/Vent distracts the four long enough for Grey/Ashe to escape and continue on, and the five begin to battle.

When Ouroboros begins to crumble after the defeat of Albert, Model Z decides to hold off the four alone, allowing Aile/Vent to go to the aid of Grey/Ashe, who had fainted after the battle. Model Z somehow manages to disable their movement, claiming that he knows far more about their Biometals than they do. The outcome of this battle is yet unknown. However, if the player clears the game on Expert Mode, a hidden ending shows that the four Mega Men survived and presumably allied themselves with Master Thomas. 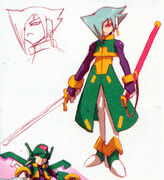 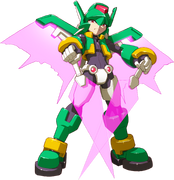 Aeolus and Siarnaq in their Megamerged forms.

Aeolus along with the other Mega Men and Master Thomas.

Aeolus as seen in his cipher.
Add a photo to this gallery

Retrieved from "https://megaman.fandom.com/wiki/Aeolus?oldid=349179"
Community content is available under CC-BY-SA unless otherwise noted.