MMKB
Register
Don't have an account?
Sign In
Advertisement
in: Articles in need of expansion, Reploids, Mavericks,
and 8 more
English

Agile (アジール, Ajīru) is one of the three X-Hunters in Mega Man X2, an elite group of Mavericks who are bent on avenging Sigma and resurrecting Zero as a Maverick under their command.

Agile is the tallest of the X-Hunters, standing around the height of Sigma himself. His armor is predominantly purple in color and is made to resemble a sharp coat, possessing two tails and large shoulderpads. His helmet is also designed to resemble a hat of sorts, coming to three individual points at the top. Like all the X-Hunters, his feet have tips that point upwards. He also possesses an alternate form where he transforms into a hovercraft of sorts, with only his head and shoulderpads remaining.

Agile is described as the charisma of the X-Hunters.[1] He is characterized by his fast movement and expertly wielded beam-sword, and (in the Japanese version) his polite speech pattern and collected personality. His role in the organization is as a spy to discover enemy secrets and as an acting combat commander, taking the forefront on battles.[2]

Nothing is known of Agile's past. He is part of the X-Hunters, who took over Sigma's rebellion in his absence to keep up the fight. The rebellion laid low at first, quietly analyzing X and the Maverick Hunters while researching and repairing the parts of Zero recovered from the last battle. However, without Zero's control chip they could not fully resurrect him.

Six months after Sigma's defeat, the Maverick Hunters raid an old factory that is mass-producing weapons and Mechaniloids for the Maverick army. The X-Hunters watch the attack from afar in their Arctic fortress, affirming that they will not underestimate X.

After X destroys two of the eight Mavericks, Agile and the X-Hunters grow anxious. They challenge X to a series of duels, using the rebuilt parts of Zero's body as bait. Agile is the first of the X-Hunters to stop awaiting X's arrival among the stages, but if X defeats him before he leaves, he will relinquish one third of Zero's body - his lower body - before retreating.

Agile reappears as the boss of X-Hunter Stage 3 to challenge X again, this time in his Agile Flyer form. However, he is defeated, and before his demise he cries out for his master, Sigma, to avenge him, revealing that they indeed resurrected him.

When first encountering him in one of the hidden rooms, he acts as his name implies, dashing along the ground and attacking with a series of lightning-fast slashes. Agile is easy to manipulate in this battle; the best strategy is to cling high on the wall, drop down to avoid his saber's crescent beam, attack (the X-Buster will suffice), and then quickly climb back up, and repeat. His weakness in this battle is the Magnet Mine.

For Agile's second and final encounter in the third X-Hunter Stage, he appears in a flight-type form known as Agile Flyer (アジールフライヤー, Agile Flyer) at the top of the room. Agile will hold his position at the top of the screen, erratically moving from side to side while raining attacks down on the player. Magnet Mine (fully charged or not) is the best weapon to use in this battle, as it can be aimed up to his position; it's also good for countering the missiles. Another effective weapon against Agile is the Shoryuken found in the stage.

Agile appeared in the manga.

Agile and his comrades would later appear in the Worlds Unite crossover event from Archie Comics, having been revived by Sigma to serve in his reality-conquering army. 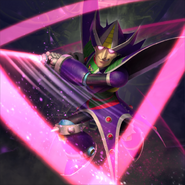