Aile (エール, Aile) is a Reploid who is a member of the Resistance in Mega Man X: Command Mission.

Not much is known about Aile's past, besides what Spider tells X. According to him, Aile and Spider once worked together as rookie bounty hunters. One day, Spider "goofed" somehow, and Aile was damaged because of his mistake. Because of the incident, Aile retained a scar below his left eye, and the lower half of his body was attached to a floating machine similar to a wheelchair.

When Chief R was captured by the Rebellion Army, Aile rushed to the Governor's Precinct in Central Tower to attempt a rescue. He met X, who was on a reconnaissance mission, and explained the situation. Aile then ripped his ID lens from his chest and gave it to X so that he could access the Governor's Precinct, while he self-destructed to keep a large number of Preons at bay. Aile's sacrifice allowed X to continue unhindered.

Aile appeared as an Unit Card in TEPPEN. 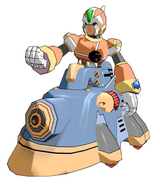 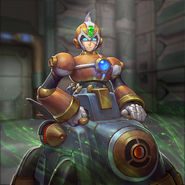 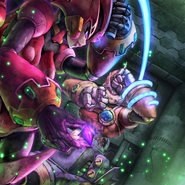 In the TEPPEN card Resisting Coercion.