Air Shooter (エアーシューター, Eā Shūtā) is Air Man's Special Weapon. It causes air to become tornadoes, being used to fire several small whirlwinds that spread out and rise upward, making it an effective weapon against airborne enemies. Formerly, the Air Shooter's system was used in a kite flying attempt that apparently failed.[1]

Mega Man obtains Air Shooter after defeating Air Man. This weapon is Crash Man's primary weakness, does decent damage to Wood Man, and does moderate damage to Heat Man and Quick Man. The Air Shooter can do triple damage if all three tornadoes connect, good for disposing of Sniper Armor's transport. When used against enemies immune to the Air Shooter, the tornadoes are diffused instead of deflected.

Like all weapons from the first three games, Air Shooter can be used in the Wily Tower mode. Mega Water S, Hyper Storm H, Wily Machine (3rd form) are immune to it.

Like Mega Man 2, Air Shooter fires three tornadoes. It is most effective against Crash Man and Needle Man. It has no effect against Metal Man, Magnet Man, Hard Man and the Wily Machine II.

Air Shooter is obtained by the player that takes the Special Weapon Item after defeating Air Man in the "Recover the new parts!" course. Unlike Mega Man 2, it only releases a single tornado per use, but in compensation it can be fired faster. It is the weakness of Quick Man and Wily Capsule.

Air Shooter is obtained from Air Man in episode 2. It is Crash Man's weakness.

The Air Shooter appears in this fighting game as Mega Man's up aerial attack. Mega Man shoots a small tornado that rises directly upwards, unlike in Mega Man 2, where he shot them out in an arching motion. It hits opponents multiple times, dealing 9% at the start of the move and the next hits dealing 1%. The first hit elevates opponents so that they can be hit by the move repeatedly, while the next string of hits elevates them lower but high enough to still be repeatedly hit. It may KO opponents if they have mid-high damage percentages, especially if they try to jump to avoid getting hit by it.

Air Shooter is one of Dr. Wily's attacks in Puzzle Fighter, with a small tornado appearing off-screen to hit the opponent.

The Air Shooter is used by both Mega Man and Air Man in the episode "Ice Age". Instead of three small tornadoes, it instead unleashes a larger single tornado that traps opponents and blows them away. Air Man used it against Roll early in the episode and Mega Man would use it later to trap Guts Man, Cut Man and Proto Man before finishing them with the Ice Slasher.

Mega Man obtained Air Shooter from Air Man in issue 11, also downloading part of a malware with it that Dr. Wily added in his eight Robot Masters from Mega Man 2 to corrupt and control Mega Man. The plan worked, but Mega Man is saved by his friends.

Air Shooter was later used by the newly-created Doc Robot against Roll in retaliation for her whacking the robot with a broom when attempting to force Dr. Wily out of Light Labs. It is implied that this was the result of one of the Doc Robots' personalities being extremely reluctant to harm Roll due to being a child and a helper robot, a side effect of having all eight second-generation Robot Masters' IC chips inserted in forcibly into Doc Robot's body. Doc Robot later used Air Shooter as a means of travel when reporting to Dr. Wily that Mega Man had arrived at the castle.

Air Shooter is Air Man's main attack. In the manga it uses highly compressed air to create an artificial tornado. As the pressurized air expands, it creates a shockwave and, as per Bernoulli's principle, the difference in air pressure within the funnel of the tornado grows steadily. As the shockwaves overlap each other, they further feed the tornado, increasing its intensity and resulting in a devastating attack. 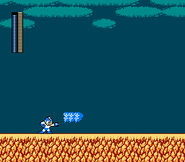 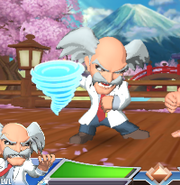