Mega Man 11
The Air Stone (エアストーン, Air Stone) is an enemy from Mega Man 11. It is a small security robot that uses advanced optical technology to stay invisible most of the time. However, if Mega Man gets too close, the Air Stone will reveal itself and, if not destroyed quickly enough, shoot out eight small stones and then turn invisible again. Air Stones make their only appearance in Block Man's stage.

If the player can spot the visual vibrations from the cloaking technology, it is possible to easily take down Air Stone (and its variants) from a distance or know where they will appear to dodge their attack depending on the situation.

Mega Man 11
Air Fire (エアファイア, Air Fire) is a variant of Air Stone seen in Torch Man's stage. It is exactly the same as the Air Stone, except these monsters shoots out fireballs instead of stones out of their bodies.

Mega Man 11
Air Nut (エアナット, Air Nut) is another variant of Air Stone, created by Dr. Wily specifically to protect his Gear Fortress. This one appears in the first Gear Fortress stage and shoots metal nuts instead of stones in their attacks.

Air Stone
Using hi-tech optical camouflage to lie in wait until an intruder approaches, this bot shows up out of nowhere and launches showers of rock-hard bullets!

Air Fire
The fiery version of the Air Stone, this security bot blends in well in fiery areas, but tends to be easy to spot in cooler locales.

Air Nut
A modified Air Stone intended to defend the Gear Fortress. The sheer number of them is a testament to Wily's obsession with victory at all costs. 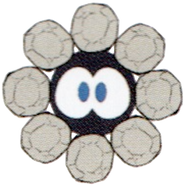 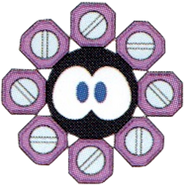 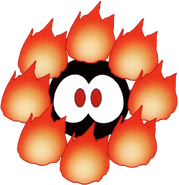 Air Fire
Add a photo to this gallery

Retrieved from "https://megaman.fandom.com/wiki/Air_Stone?oldid=355156"
Community content is available under CC-BY-SA unless otherwise noted.