Akuma, known as Gouki (豪鬼, Gōki) in Japan, is a character from the Street Fighter series. He is a cold and extremely powerful Ansatsuken fighter whose sole purpose of existence is to hone his fighting skills by battling and destroying strong foes. He rarely displays any sign of emotions, aside from occasional bursts of anger. He is Gouken's younger brother, Gouken being the master of Ryu and Ken.

Akuma appears in Street Fighter X Mega Man as the secret final boss. He will appear during the fight with M. Bison when he has 1/4 of his health or lower. His weakness is the Hadoken and the Optic Laser.

As the true final boss, Akuma has a huge arsenal of moves, from attacks that cover the entire floor, to airborne attacks, to even area of effect attacks. He moves very fast and hits really hard, he starts off with a full Super Combo Gauge. And most of the times, he will start off the fight with his Shin Shun Goku Satsu. this move travels really fast and goes across the entire floor, if he hits Mega Man with this move, it's Instant Death, although, it's a really easy attack to avoid, only taking a good timed jump. He moves across the screen with his Ashura Senku, which deals no damage, so it's safe to walk across it. He will attack with his Zankuu Hadoukens, in which he will shoot 2 purple projectiles in a downward direction, Mega Man can jump over, stand in the middle or slide under the shots in order to avoid them. His ground projectiles, the Gou Hadouken and Shakunetsu Hadouken, act just like as Ryu's Hadoken and Metsu Hadoken respectively, however, much faster. They can be avoided by jumping. The Messatsu Gou Shourryu, a move where Akuma strikes with three shoryukens in succession. Mega Man can avoid it on the first two strikes by jumping over, or on the third strike by sliding under. Akuma's Tatsumaki travels across the floor, but again, can be avoided by just jumping or sliding under. Akuma also uses the Tenmakuujinkyaku a downward kick while jumping, which can be avoided with a well timed slide, and the Misogi, where he will do a pose and then teleport on top of Mega Man off screen and then come back down and releasing a big purple shock wave, it can be avoided by sliding or jumping at the right time.

It is worth pointing out that the usage of an E-Tank during this fight is useless since, while Mega Man recovers health, Akuma will regain his health as well.

With the Hadouken or Optic Laser, Mega Man can destroy Akuma's Zankuu Hadoukens with a well timed charged shot from the Hadoken or a laser shot. The only strategy is to avoid his attacks and shoot whenever the oportunity presents itself, which most of the times is when he uses the Zankuu Hadoukens or his Super Combo Attack, since he is wide open for a moment after going to the other side of the screen.

Akuma appeared as a Hunter Program and boss in the Street Fighter V event. 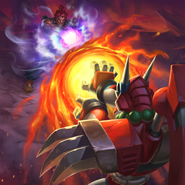 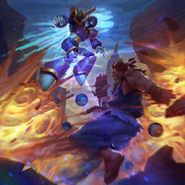 Akuma facing Vile in the TEPPEN card Pleasure in Destruction 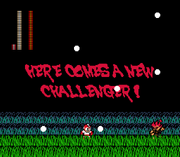 After reaching M. Bison with 4 perfects and without the use of continues in Street Fighter X Mega Man, Akuma will kill off M. Bison and challenge Mega Man to a fight. 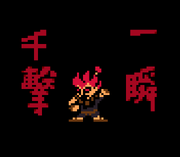 The Kanji that appears when Akuma grabs Mega Man with his Super Combo attack in Street Fighter X Mega Man. 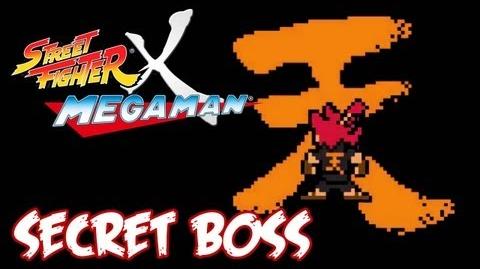