Inside a lighthouse, ShiningMan is singing joyfully when a mechanical claw suddenly appears from a large hole and takes him away, the hole closing afterwards. Somewhere else, WhaleMan is working on an aquarium and is about to change his shift when a claw also takes him away.

In a library, Maylu is studying and some boys are playing a game nearby. Maylu asks Roll to search some history data for her, and she tells Maylu to take a break while she does it. While walking in the library, Maylu finds Chaud and asks how Lan is, learning that he is stuck in Sharo's airport due to the weather. While Roll is browsing the library's data, a large NetNavi pushes her to access it and he is suddenly taken by the same claw that took ShiningMan and WhaleMan. Roll calls Maylu and shows her and Chaud what is happening, but the Navi disappears before they can do anything. Nearby, the Navi's operator calls for his Navi, dropping a coin with a G while calling him. Chaud takes the coin, and someone watches him from the library's camera and laughs.

Maylu and Chaud talk with Mr. Famous about what happened and he reveals that it has been happening every few days, including in NetCity. No one knows who is doing it, but apparently all kidnapped NetNavis have high battle power, some even being former participants from the N1 Grand Prix. They help Mr. Famous investigate, Chaud going to the lighthouse to talk with ShiningMan's operator, and he finds it a coincidence that WhaleMan was also kidnapped as he had met his operator in a game center not long ago.

In a construction area, PickMan and DrillMach are kidnapped. Later, Chaud and Maylu talk with their operators, and learn that they have been on a game center before. Chaud takes the coin the library boy had and Maylu remembers that he was talking about a game. Chaud is watched from a camera, and the one watching hacks a crane and drops a beam on him, but he manages to avoid it on time. Chaud contacts Mr. Famous, believing that the game center in front of the station is connected with the missing Navis, as all of them had passed there before their disappearance. Chaud and Maylu go to the game center, Game Soul, and contacts Mr. Famous before going there to investigate. In a fighting game, they notice that some of the top 10 in the ranking are disappeared Navis. Chaud uses the coin he found and starts the game, counting on Maylu and Roll to win the game. She manages to reach the last stage, but has trouble against the final boss, a Life Virus. When she is about to lose, Chaud secretly uses his Battle Chip Gate to give her a hand, opening a black hole that sucks the virus, defeating it and winning the game.

Two hours later, Roll is walking around NetCity as a lure, and Mr. Famous informs Chaud that he took the game out of the game center as precaution. Roll is then kidnapped. She awakens in a cell, where Drill Mach asks if she also cleared that game and informs that it is only a test for collecting strong Navis. Roll notices that Drill Mach is severely injured. A light appears and PickMan falls from it, also injured, and says that if one can't win, they are sent back to the cell. Roll asks where they are, and the construction Navis explain that they are stuck in a game called Delete Battle, where they are forced to fight each other for the entertainment of those who captured them until they are deleted, and those who refuse are deleted. Roll suggesting calling for help, but Drill Mach notes that they can't as they are cut from the outside world, but Roll shows them that she has an IPC Dimensional Beacon and activates it to show her location, noting that help will soon appear to save them. A light appears around Roll and she disappears.

Roll appears in an arena filled with Battle Chips in the air, and is set to fight against the NetNavi that she saw in the library. She refuses to fight and is electrified, a voice telling her to fight or else she will be deleted. Chaud and Maylu race to Roll's location, Chaud noting that it near a research lab. The battle starts, and the Navi takes a Battle Chip from the sky and attacks, but Roll avoids him. Roll looks at the chips and notes that there are no defensive ones. Roll asks if they really need to battle, and the Navi says that they don't have a choice as they will be deleted otherwise. The one watching the battle is having fun, but thinks that it is not intense enough, and uses Lava Stage. The Navi attacks Roll, but she avoids the attack and he nearly falls on the lava. Roll tries to help him, but he attacks and gets out of the pit, catching her with Yo-Yo. When he is about to finish Roll, Maylu protects her with Life Aura and logs her out.

Chaud enters the area's control room, finding a robot inside. The robot activates a Dimensional Area and calls several virus, and Chaud deletes them with a Boomerang. Chaud goes after the robot, but is attacked by a virus and loses his PET, but Cross Fusion MegaMan appears and helps him, easily deleting the viruses and explaining that the weather in Sharo finally got better. With the robot pinned, he starts crying. Someone appears, calling the robot Allegro and noting that his young brother apparently caused them trouble. They ask who he is, and he reveals that he is Bass in Kid Grave's body, and he used it to observe the human world, but finds it worthless. He notes that Allegro is a great robot created by him that is able to create Dimensional Areas at will, but his mental age is a bit low, considering him stupid for collecting NetNavis and making them battle for amusement. Bass takes a part from Allegro's head (supposedly his memory) and destroying it, shutting him down. Dark ProtoMan, who had appeared not long ago to see why there is a Dimensional Area, asks if Bass wants to join Nebula, as he also has a grudge against humans. Bass simply tells him to leave and disables the Dimensional Area, forcing Dark ProtoMan to leave and reverting Lan to normal. Bass disappears, saying that he will see them again at another time.

The NetNavi captured in the library 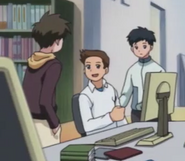 The operator (center) of the Navi captured in the library

The top 10 in the game's ranking