MMKB
Register
Don't have an account?
Sign In
Advertisement
in: Articles with hAudio microformats, Articles in need of expansion, WWW,
and 4 more
English

Alpha, known as Proto (プロト, Puroto) in Japan, is the final boss of Mega Man Battle Network 3, a defectious program that takes the form of an armored mass of a slime-like substance. It was originally the base for the Net community, the primal Internet [5].

Spoiler warning: Details of plots, secrets and/or endings may follow.

Alpha is the first Internet created by SciLab in a top secret project by Tadashi Hikari. It was developed as the basis for the current Net community. One day, all of the devices connected to Alpha malfunctioned, and the researchers thought the problem was the "AutoNavi" that was developed at the same time in another project. SciLab reacted strongly against the man who developed the AutoNavi, Dr. Cossak, and decided the Navi had to be deleted. He was held in custody, and the Navi Elite Corps deleted the Navi, but they didn't know that the Navi (later revealed to be Bass) survived. They thought the deletion of the Navi would solve the problem, but after that, the most devastating net-accident in history occurred: All devices connected to Alpha were destroyed. It was later figured the AutoNavi was not responsible, but Alpha itself, which was riddled with bugs and gained a level of intelligence (more like instinct) around that of an amoeba. Alpha crept into all devices connected to itself and absorbed all manner of NetNavis, programs, and others, like a giant amoeba devouring all Cyberworld. A week later, it had devoured everything, and SciLab took advantage of its bloated state to capture it. Tadashi Hikari stopped it by installing a program called "Guardian" into Alpha's core, and SciLab locked it with four TetraCodes. All the Net society was brought to a halt for 6 months. This event was known as "The Alpha Revolt".

Years later, during Mega Man Battle Network 3, the WWW managed to steal Alpha from SciLab to use in Wily's "Cybergeddon" plan to destroy the Net society. Wily began decoding Alpha and started havoc by using AlphaBugs to control machines, starting by machines from the Army systems around the world. Lan's father tracked the WWW base at a place known as "The Demon Waters", a part of the ocean full of "Demon Currents", named due to the ferocious currents and whirlwinds. When Lan reached Wily, he had already decoded 80% of Alpha. Wily enters the network using the Pulse Transmission System. Lan and MegaMan uses the Pulse Transmission and Full Synchro to go after him, but Wily awakened Alpha with Bass' help to destroy the "Guardian" program. After MegaMan defeats Bass, Wily reveals he wanted Gospel to create a copy of Bass so he could destroy the "Guardian", and expected he and MegaMan to destroy each other. Alpha devours Bass and Wily, and the player fights against Alpha.

After defeating Alpha, a door appears, where it contains a file with the shape of a room from SciLab in the past and a data of Tadashi Hikari's personality, who monitors the Guardian and avoids Alpha's reawakening. With the destruction of Alpha and the Guardian, Tadashi was also going to be deleted, and he gave an encrypted message to Lan give to Yuichiro before the program started to fall apart. While leaving, a part of Alpha that was still alive swallowed MegaMan and Lan, and MegaMan overloaded himself to save Lan, presumably destroying himself. Lan later gave the message to his father, and Yuichiro reveals Alpha wasn't deleted until now because of the data of Tadashi. Months later, Yuichiro managed to read the encrypted message and was able to rescue MegaMan from a place Alpha could not touch, where Tadashi's personality data was stored. As this data of Tadashi doesn't appear in other games, it's believed he had to remove his data to store MegaMan, but there could be another possibility. In a sidequest, it's shown Bass somehow managed to survive, but had amnesia. Shortly afterward, he meets Gospel, and they merge into Bass GS.

Alpha, the prototype of the internet, for some unknown reason formed a "gateway" between the Cyberworld and the DarkNet, leading to Dark Power appearing on Earth and the Forces of Darkness attempting to conquer it. After the Quartet of Evil is deleted, Alpha revives Bass as Bass GS with the Dark Power and is destroyed by him.

Alpha appears in the manga.

Alpha's only weak point, its core, is covered in a gelatinous substance that must be peeled away first. While any attack can work on it, rapid Mega Buster shots work best to conserve Chips to inflict damage. Eventually, the goo will restore itself and must be peeled back again. As its arms are disconnected from its body, it can attack with them both down columns and rows.

Because of Alpha's multilayered defense on its core, multi-hit attacks are very useful here such as Wood Style's charge shot as well as BubbleMan and PlantMan's Navi Chips. Be sure to power them up with attack boost chips.

Alpha has three Battle Chips, all being exclusive to one game version.

Yūji Ishihara used a gate guard mecha from Mega Man Legends as a reference for the irregular shape of Alpha's body,[6] possibly Balkon Gerät, although it also has a single red eye like most Reaverbots. Alpha also appears to have traits of the Devil series bosses from most of the other Mega Man series, particularly the Green Devil as they share the same slime-like body and weakness in the middle of the slime. 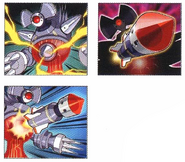