Altair, known as Hiko (ヒコ, Hiko) in Japan, is a character from Mega Man Star Force 2. He is Dr. Vega's deceased lover, who died in a war in the Tannabata Kingdom. His revival is part of Dr. Vega's reasons to awaken Le Mu. Her right-hand man during the second game is a Matter Wave copy of Altair, known as Hollow.

Altair never appears in person, only briefly in spirit, helping Mega Man on the Mu continent.

Altair appears briefly as a disembodied voice after MegaMan defeats Le Mu. Hollow's cry for someone to help Vega reaches across dimensions and space, calling Altair to Mu. He encourages Vega to continue living and not to pursue her mad ambitions, then leaves, promising to watch over her. 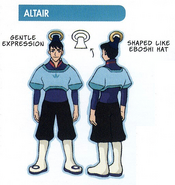 The name Altair is a reference ot the star of the same name, which is the brightest star in the Aquila constellation, as well as a part of the Summer Triangle. The star Altair plays a large role in the lore of the Japanese Tanabata festival, along with the star Vega, which represent the deities Orihime and Hikoboshi.