Amy Gelande, known as Ai Nameshida (滑田 アイ, Nameshida Ai) in Japan, is a minor character from the Mega Man Star Force series. She is a professional skier known as "The Skiing Angel" that trains at Grizzly Peak, as her father, Mr. Gelande, owns the Grizzly Peak Resort Hotel. She is shown to be generally nice and kind.

Amy first appears when she saves Geo Stelar from a giant snowball that was falling in his position. Zack and Bud are immediately star struck and start hanging out with her instead of figuring out why there have been so many accidents in the area, which makes Luna mad.

Bud tries to impress her by winning the hamburger eating contest in Foodtopia, but accidentally turns into Taurus Fire. Later, in a huge blizzard caused by Yeti Blizzard, she is lost in the skiing fields and Geo and Bud go save her. Bud obviously has a crush on her, as he clearly states he loves her, and they form a BrotherBand.

After the incident, she trains for the upcoming qualifiers in Choina. By seeing her Star Carrier, Geo can choose to help her, and she requests the Battle Cards SnoBall1, JetSki1, and Scythe1. After receiving them, Amy will be able to come up with a trick that she names "The Mach 3 Jump". In exchange, she gives Geo a HP+200/225 and Amy WP. 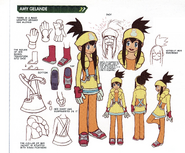 Concept art of Amy Gelande.
Add a photo to this gallery

The name Gelande appears to be derived from the German gelände ("terrain") or from the Japanese gerende (ゲレンデ, gerende "slope"). Her Japanese name, Nameshida, can be translated as "slipping field".

Retrieved from "https://megaman.fandom.com/wiki/Amy_Gelande?oldid=288769"
Community content is available under CC-BY-SA unless otherwise noted.