Andromeda (アンドロメダ, Andoromeda) is a space-themed war-engine capable of destroying planets. It is the final boss in both the video game and anime Mega Man Star Force. It is either a weapon built by the FM-ians or a legendary creature of Planet FM.

Andromeda requires the Andromeda Key to activate, which Omega-Xis stole from the FM-ians. Throughout the first game and season of the anime, the FM-ians' goal is to recover the key from him and revive Andromeda.

The FM-ians mention it during their raids on Earth, and apparently, Omega-Xis has something they need to activate it - the Andromeda Key. Ophiuca states that it needs two things: the Key and the FM King's control panel. When Omega-Xis leaves Geo, the revived FM-ians ambush him and, despite Harp Note's attempt to help, succeed in taking the Andromeda Key. Apparently, they plan to have Andromeda consume all life and destroy planet Earth, just like it destroyed Planet AM. They start kidnapping people to feed them to Andromeda, but are thwarted by MegaMan and the Satellite Admins.

Later on in the Space Station Peace, after MegaMan deletes all the FM-ian warriors and confronts the FM King, Cepheus, the FM King summons Andromeda. Omega-Xis states that it has an EM body, but all it ever does is eat other EM beings. Half-way through the battle, it transforms into a robotic form. After MegaMan defeats Andromeda, Cepheus sends it for another go at MegaMan, and Geo can not fight anymore because of the King's strong Z-waves. However, it goes cannibalistic and tries to eat Cepheus, but Geo is still helpless. Geo then remembers his friends who are depending on him, and his father, and that gives him strength again. Using one powerfully charged shot, he destroys Andromeda once and for all, saving Cepheus and planet Earth. Geo and Omega-Xis both forgive Cepheus.

Andromeda can be fought in the last wavehole in the Space Station, beyond Ophiuca's door. Once you pulse in, you can not pulse back out until you defeat Andromeda. It can fought repeatedly so long as you still do not have the 6 icons. After defeating it, then defeating the version's Satellite Admin, he tells you to fight the "truly lonely giant". After getting all the icons, going to the place where you find Andromeda will let you battle Andromeda∞ (4000HP). It then stays permanently in that form, and can not be reversed back to its original form. Beating this means you've finished the entire game and its secrets, with an extra screen at the end showing Geo and all his friends and commending the player for his efforts.

Andromeda has a similar role in the anime. FM-ians constantly attack Earth in search of the Andromeda Key, which is in the possession of Omega-Xis. When Omega-Xis comes back to help Geo, they battle against the FM-ians but are overpowered, and Cygnus Wing captures Omega-Xis, obtains the key and prepares to use Andromeda to destroy the Earth. However, its method to destroy the planet differs from the game. In the game, Andromeda is meant to devour everything on the planet, while in the anime, Andromeda transforms into its robot form and uses its arms to drill into the core of the planet, then release a large amount of negative energy to cause the planet to self-destruct.

The Satellite Admins Leo Kingdom, Pegasus Magic, and Dragon Sky soon intervenes and explains to Geo the true nature of Andromeda: a machine designed to destroy planets that once destroyed Planet AM, the home planet of the Admins. They grant him the Star Force to help destroy Andromeda, and they also save Omega-Xis from the FM-ians. While MegaMan battles the FM-ians, the Gemini Spark twins appear and attempt to steal the Key from Cygnus Wing. After MegaMan destroys Cygnus, Omega-Xis destroys the Key. Pat, however, finds its remains. Gemini Spark then gives a fake Andromeda Key to Cancer Bubble, telling him it is the real one, while they keep the real one for themselves.

The FM-ians now have a new goal: to gather enough Negative Energy from humans to revive Andromeda, unaware that Gemini Spark has the real key and is using them to gather Negative Energy so they can use it for themselves. During a mass attack on the city, the fake Key is destroyed, and the FM King Cepheus orders his warriors back to Planet FM, deciding to end the war. Gemini Spark, however, is not content. He murders and erases all his fellow FM-ians since they yield more Negative Energy than humans, revealing that the Key Cancer Bubble had was a fake. Despite failing to delete Harp Note and Cancer Bubble, they proceed to revive Andromeda, which was hidden in an iceberg all along with the Negative Energy they already have, and then use to level several cities across the globe. Andromeda then rises and heads for Echo Ridge, but MegaMan and Harp Note try to intervene. They are, however, quickly overpowered, and are both thrown unconscious into the ocean, only to be saved by Cancer Bubble. Since Harp Note took the full hit for MegaMan, she remains unconscious, while MegaMan confronts Andromeda alone. Even though he uses the Star Force, he could not even damage it, and when he freezes it, it transforms to its robot form and knocks him unconscious on the street, revealing his identity to his friends. The Satellite Admins use the remaining power of the Star Force to destroy Andromeda, sacrificing themselves in the process. MegaMan then finishes Andromeda off. However, it does not end, as Gemini Spark White betrays his other half, Gemini Spark Black, to fully restore the Key and revive Andromeda. Andromeda then digs towards the Earth’s core to blow it up, and Gemini Spark leaves for outer space. MegaMan follows and catches him, but he throws the key towards Earth. MegaMan dives and destroys the key just in time, stopping Andromeda, while Cepheus deletes Gemini and apologizes to Earth and to Omega-Xis.

In a conversation Geo has with Kelvin after he briefly returned from the FM-ians' planet, Kelvin reveals that Andromeda's negative presence around the FM-ians is what caused their evil nature.

Although its body still exists, Andromeda can no longer function without its Key.

Andromeda is first seen as a more "cute" ball with an appetite for data. Though he is seen a few times, each time, he is shown to have a large appetite. Eventually, MegaMan has to fight with him, with the help of most of the main FM-ians, and even Gemini Spark lends help to defeat Andromeda. When MegaMan defeats Andromeda, Kelvin appears from Andromeda and is seen back home with Geo.

Andromeda first appears as a huge monster with a large mouth and two sets of teeth. During battle, it can transform into a more humanoid, robotic form, with its green, glassy sphere of loneliness located under its chest and a large spike in place of legs. Its outer set of teeth become its fingers, and its hands can start spinning rapidly to act as a drill.

After reaching half HP or so, Andromeda will change to its battle form, which is stationary, and its core cannot be damaged except when it flashes green (this happens as Andromeda is about to execute certain attacks), or by Breaking attacks.

Andromeda is named after the princess in Greek mythology Andromeda, who was the daughter of the king Cepheus, as a nod to its relation to the FM-ian king Cepheus.

Andromeda shares its name with the constellation Andromeda, as well as the Andromeda Galaxy. 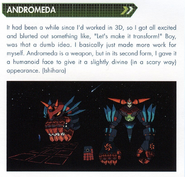 Concept art of Andromeda.
Add a photo to this gallery

Retrieved from "https://megaman.fandom.com/wiki/Andromeda?oldid=302381"
Community content is available under CC-BY-SA unless otherwise noted.