Mega Man 11
The Anti-Eddie, known as Waru Eddie (ワルエディー, Waru Edī, "Bad Eddie") in Japan, is an enemy from Mega Man 11 who is an evil doppelganger of Eddie. It is a robot that looks like Eddie, but has some changes in appearance:

Unlike their good counterpart who gives items, Anti-Eddies do the opposite and steal them. The Anti-Eddie is usually hidden under certain items, like a 1-UP and a large Life Energy in Block Man's stage and a large Weapon Energy in Bounce Man's stage. Once Mega Man gets close enough, it will jump and run off. After a few seconds, Anti-Eddie will completely jump off the screen with the item, effectively destroying it.

Depending on the difficulty level, if an item is not present when Anti-Eddie appears, it's best to ignore it. Otherwise, the best way to catch it is to use the Speed Gear to slow down time and concentrate on using rapid-fire to destroy it before it escapes with the item.

Hiding underground, this sinister mockery of Mega Man's buddy Eddie will snatch up items and carry them away. It was designed to attack Mega Man, but for some reason always runs away instead. 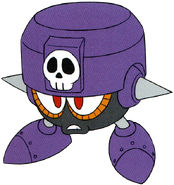