Apple Market (アップル商店街, Apple Market roughly "Apple Shopping District") is a predominantly commercial area from Kattelox Island in Mega Man Legends located in the south of the island's city, between the Cardon Forest and Downtown. This is the only part of the city where outsiders can enter due to the fact that the other districts require a citizen's ID card to be accessed. This casual shopping district has a warm kindness as its business motto. It features several shops, including the Junk Shop.[1]

When the Flutter crash landed on the island, Barrell went with the Inspector to the City Hall to settle the details. Meanwhile, by suggestion of a police officer, Roll asks Mega Man Volnutt to see if he can find parts to repair the Flutter in the Apple Market. In the Junk Shop, the woman inside asks Mega Man to see if her husband is alright. After saving him in the Underground Ruins, they inform that unfortunately they don't have the parts he needs, but they give him a Mine Parts Kit and allow him to use their old Support Car.

The Junk Shop Lightning Parts Center is owned by a couple of former Diggers. It was set up on the area around the time digouts were flourishing in the island.[1]

A toystore. One of its products is game titled MegaMan Legends (Mega Man 64 in the Nintendo 64 version).

A store with electronic goods.

A record shop where Mega Man can hear some music samples, including Another Sun (in the Japanese version). The samples are not present in the Nintendo 64 version. 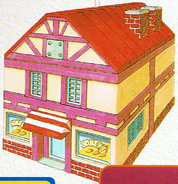 Junk Shop concept art
Add a photo to this gallery

Retrieved from "https://megaman.fandom.com/wiki/Apple_Market?oldid=228698"
Community content is available under CC-BY-SA unless otherwise noted.