April Fools' Day is an annual celebration in some European and Western countries commemorated on April 1 by playing practical jokes and spreading hoaxes. The jokes and their victims are called April fools. People playing April Fool jokes often expose their prank by shouting "April fool(s)" at the unfortunate victim(s). Some newspapers, magazines and other published media report fake stories, which are usually explained the next day or below the news section in smaller letters. Although popular since the 19th century, the day is not a public holiday in any country.

Capcom made a number of Mega Man jokes on April Fools, mainly in the Rockman Unity website. The Mega Man fandom also made several jokes, such as the announcement or leak of fake games,[1] but only "official" jokes are listed below.

Inti Creates announced Rockman ZX Soundsketch - ZX GIGAMIX, which would cost three billion yen. After April Fools the soundtrack was revealed to be real, with the price fixed for 3000 yen.

Rockman Unity announced that Roll, Mayl Sakurai, and Luna Platz would form an idol group. Their debut album, Kimi no Heart wo Transmission (君のハートをトランスミッション, Kimi no Heart wo Transmission "Transmission of Your Heart"), would be released on December 17, 20XX in commemoration of the Mega Man 25th anniversary, and the trio would host a live concert on the rooftop of Capcom HQ on the album's launch date, with posters being distributed to attendees while supplies last.[2][3] In 2015 the images from the joke were used on phone cases sold on e-Capcom.[4]

Rockman Unity announced four D-Arts figures, but notes that only one of them is real: X (Ultimate Armor), Zero (Mega Man Zero series), Iris, and Roll (Mega Man 8 outfit).[5][6] On April 5 it was revealed that Ultimate Armor X was under development.[7]

Rockman Unity teased a Mega Man X Ver.Ke model kit,[8] which became popular and was later made into a real figure by TruForce Collectibles. The design was also used as a costume for X in Marvel vs. Capcom: Infinite.

Rockman Unity announced the "Spring Roll-chan Festival 2015", a celebration for Roll that would have food and merchandise.[9] Among the merchandise, only three were real: A Gigantic Series statue of Roll with her Mega Man 8 outfit, and two keychains that were included with it as a pre-order bonus.[10]

Rockman Unity included a spot-the-differences activity using the Mega Man Legacy Collection cover art. Theere are 41 differences (for the date 4/1) between the two images, and readers are challenged to try spotting as many as possible within 10 minutes. Ucchy found 35 in the time limit.[11]

Rockman Unity announced the "Subaru Style Shooting Star Rockman" (Star Force Mega Man with a Geo Stelar color style) Sen-Ti-Nel figure as if it was a joke,[12][13] but it was later revealed to be true.

With 2019 being the last year of the Heisei period, Ucchy decides to remember previous April Fools pranks made in Rockman Unity:

Afterwards Ucchy wonders if his memory is accurate, feeling that he only got the first one right.[18][19]

Rockman Unity announced that e-Capcom is selling ceramic silver Rockman rings for 690 million yen (roughly $6,413,550.00 US), but they quickly sold out, and there are plans to release a Sigma ring and a Mac ring.[20]

Luna, Roll, and Mayl as idols 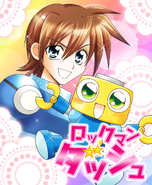 2020 ring
Add a photo to this gallery

Retrieved from "https://megaman.fandom.com/wiki/April_Fools%27_Day?oldid=316185"
Community content is available under CC-BY-SA unless otherwise noted.