Arashi first appears in the game disguised as a mechanic to fix Yai Ayanokoji's bath; he actually arrives at Lan Hikari's house first by mistake. Once at Yai's, he uses AirMan to sabotage her ventilation system so that she would be knocked unconscious by a poisonous gas. He also rigged the doors to trap intruders so they can suffer the same fate.

He planned to hold her for ransom to collect a large amount of cash to fund the Gospel organization. But, his plan is foiled by MegaMan and Lan, who defeated AirMan and saved Yai. However, Arashi escapes. He is later seen at the ACDC Metroline station talking to his boss who declares that he failed too many times to allow him to live. A briefcase in the back of the room explodes, presumably killing him, although an email reporting on the explosion mentioned there weren't any people injured, implying this wasn't necessarily the case.

Arashi's survival was later confirmed when he appears as a competitor in the Battle Chip GP, using his Navi AirMan.

Much like his video game counterpart, Arashi serves as a member of Gospel (renamed Grave in the English dub), with the additional details in that he seeks revenge against AyanoTech due to his small company being outdone by the former. 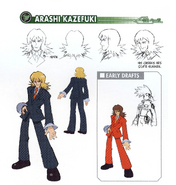 Retrieved from "https://megaman.fandom.com/wiki/Arashi_Kazefuki?oldid=334224"
Community content is available under CC-BY-SA unless otherwise noted.