View source
watch 02:52
Roblox: DeepWoken - The Loop
Do you like this video?
Play Sound
This article is set to be rewritten to fit MMKB's standards. Please note that large changes will be made and that your edits may be heavily edited or erased.

The Armor Parts, also known as First Armor and Armor of Light, are four parts that form the first armor that Mega Man X receives from the Light Capsules in the Mega Man X series. It first appeared in Mega Man X, and has since made appearances in Mega Man Xtreme, Mega Man Maverick Hunter X, a remake to the original game, and Mega Man X DiVE.

After defeating Sigma's army in Mega Man X, X returned the armor parts to the Light Capsule. They were hidden deep underground to protect them, analyzing and improving them into the armor parts from Mega Man X2.[1]

Foot Parts - Upper part of leg becomes white, with blue dots on the side. Yellow borders separate the white and blue areas. In the remake version, a larger gold border replaces the yellow border and blue portion above it, and the feet has more white portions than the original.

Head Parts - Border around the head becomes white and a yellow crest forms near X's crystal on his helmet, which are more pronounced in the remake.

Body Parts - X becomes covered with a chunky white chest plate. The shoulder armor is stockier in the remake version.

X defending himself after taking a hit with the Armor Part. 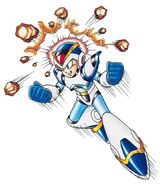 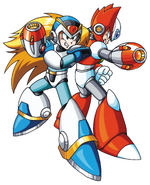 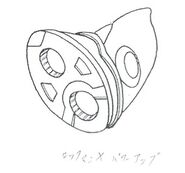 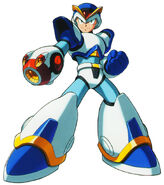 The armor as seen in Mega Man Xtreme. 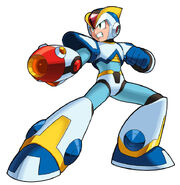 The armor as seen in Maverick Hunter X. 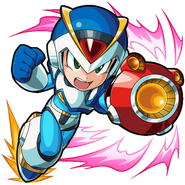 X with the armor in Street Fighter x All Capcom.

The armor in Zombie Cafe. 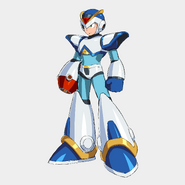 Armor of Light concept art from Marvel vs. Capcom: Infinite. 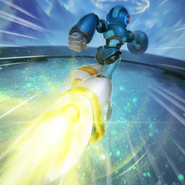 X with the Foot Parts in the TEPPEN card Agility. 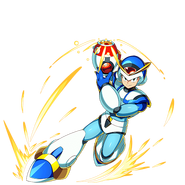 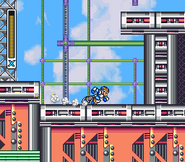 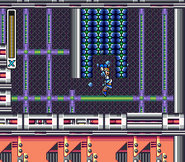 This helmet enhancement will allow X to break some ceilings with a headbutt.

This new body armor will reduce damage to X's systems by fifty percent, as seen with this comparison. Left: First Armor - Right: No Armor 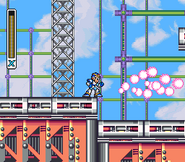 The X-Buster part will allow X to fire all types of weapons.

The Zero Buster, exclusive from the PSP remake. 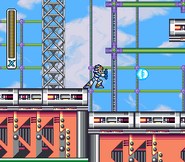 X with the Armor Parts in Army Men Strike.

Mega Man X equipped with all weapons in the First Armor from Mega Man X. 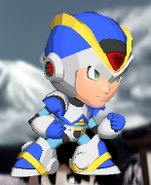 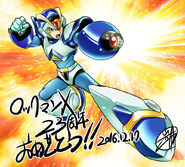 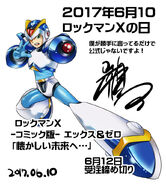