Two Armor Soldiers piloted Ride Armors in the area controlled by Chill Penguin. One of them made a surprise attack to X, nearly defeating him, but X managed to defeat the pilot and took over the Ride Armor to fight the other Armor Soldier. During the fight, X left his Ride Armor and pointed the X-Buster to the soldier, but offered him a chance to live if he abandoned Sigma. The soldier accepted and escaped, while X destroyed the Ride Armors.

More Armor Soldiers are later seen with other Mavericks surrounding X and Zero in the forest that was controlled by Sting Chameleon, who was just destroyed by X. 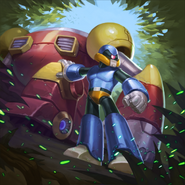 Armor Soldier along with other enemies in the Rockman X manga