Armored Armadillo was a Maverick Hunter who led the 8th Armored Battalion. When Sigma announced his rebellion, Armored Armadillo followed him out of loyalty to his commander, feeling duty-bound to serve him. He was stationed in the Energy Mine Ruins, where he restarted the mine to supply Sigma's army with mined ore and minerals.

When confronted by X, Armored Armadillo argued with X over whether or not he was Maverick for obeying his commander, Sigma. He then fought X and was destroyed. In Vile Mode, he was disgusted by Vile's selfish and disloyal nature, and was destroyed in their battle.

Armored Armadillo as he appears in Maverick Hunter X appears in TEPPEN.

Normal Mode Starting battle will be the same as the classic version, with the difference being that Armadillo will move in a diagonal pattern across the room after he charges at X, allowing him to dodge by timing his dashes properly to avoid his path when he is rolling across. While his Armor is attached, he is invulnerable to any weapons unless X strikes him with a Level 2 Charged Shot (if Armadillo is still armored, once his Armor has been purged, a Level 1 Charged Shot should be sufficient) in which he stops rolling and reverts to normal upon hitting the ground. Once he reverts, he is immediately vulnerable to attacks in which he can either start the rolling attack or hit lasers with his head. Armadillo can also do a charged Rolling Attack by charging up before attacking X. Armadillo will spin at a fixed point before rolling towards you and along the walls and ceiling of the boss room 8 times before reverting, increasing the speed of the attack with every loop completed. In the Sigma Palace Stage or in Free Play Mode, X can become completely invulnerable to Armadillo's lasers and energy beams by simply unleashing a charged Rolling Shield to form a spherical barrier around X, and all of Armadillo's lasers and shields will simply go right through him without any damage.

Hard Mode Battling Armadillo in Hard Mode will see Armadillo add one more rolling attack to his arsenal of moves: Armadillo will start rolling and jumping up to move around the room at a random path, shooting 4 energy beams while doing so. Time used in this move is the same as the normal rolling attack and a Charged Rolling Shield will make dodging him little easier since X can focus on dodging the actual Armadillo himself. Again, X can stop this by hitting him with a Level 2 Charged Shot (or Level 1 if Armadillo's Armor has been purged) to stop the attack. 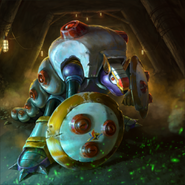 Armored Armadillo in TEPPEN
Add a photo to this gallery
Retrieved from "https://megaman.fandom.com/wiki/Armored_Armadillo/Maverick_Hunter_X?oldid=356776"
Community content is available under CC-BY-SA unless otherwise noted.