Armored Armadillo, known in Japan as Armor Armarge (アーマー・アルマージ, Āmā Arumāji), is an armadillo-type Reploid in Mega Man X. He was a Maverick Hunter from the 8th Armored Division under Sigma and was a very loyal soldier. When his master became a Maverick by rebelled against humankind, he followed suit only to remain true to his loyalty.

Armored Armadillo usually begins the battle by encasing himself into a ball and rolling around the room or towards X, proving to be very difficult if the player is unprepared. However, these attacks are easily dodged had X acquired the Foot Parts from Dr. Light earlier. The other attack consists of firing small energy blasts from a laser hidden in his head. He can also use some of his armor to deflect normal shots and absorb energy from charged ones, resulting in him firing quick energy blasts in all directions. He is less likely to guard while shooting, making it the ideal time to attack if one is without his weakness.

One hit from the Electric Spark will make most of his armor pieces fall off, making him more vulnerable. While in this state, X can deal damage to Armadillo even when he is in rolling form. This is due to his armor being kept attached to his body by means of electromagnets.

Starting battle will be the same as the classic version, with the difference being that Armadillo will move in a diagonal pattern across the room after he charges at X, allowing him to dodge by timing his dashes properly to avoid his path when he is rolling across. While his Armor is attached, he is invulnerable to any weapons unless X strikes him with a Level 2 Charged Shot (if Armadillo is still armored, once his Armor has been purged, a Level 1 Charged Shot should be sufficient) in which he stops rolling and reverts to normal upon hitting the ground. Once he reverts, he is immediately vulnerable to attacks in which he can either start the rolling attack or hit lasers with his head. Armadillo can also do a charged Rolling Attack by charging up before attacking X. Armadillo will spin at a fixed point before rolling towards you and along the walls and ceiling of the boss room 8 times before reverting, increasing the speed of the attack with every loop completed. In the Sigma Palace Stage or in Free Play Mode, X can become completely invulnerable to Armadillo's lasers and energy beams by simply unleashing a charged Rolling Shield to form a spherical barrier around X, and all of Armadillo's lasers and shields will simply go right through him without any damage.

Battling Armadillo in Hard Mode will see Armadillo add one more rolling attack to his arsenal of moves: Armadillo will start rolling and jumping up to move around the room at a random path, shooting 4 energy beams while doing so. Time used in this move is the same as the normal rolling attack and a Charged Rolling Shield will make dodging him little easier since X can focus on dodging the actual Armadillo himself. Again, X can stop this by hitting him with a Level 2 Charged Shot (or Level 1 if Armadillo's Armor has been purged) to stop the attack.

Armored Armadillo: I am under strict orders to protect this mine...

X: You don't need to take orders from someone like Sigma! He's insane! Open your eyes, Armored Armadillo!

Armored Armadillo: Whether he's insane or not... It's not my place to judge him. I must obey!

X: Looks like you've gone Maverick! I'm taking you out!

Armored Armadillo: X... I have orders to defeat you if you showed up.

X: You'll fight me just because Sigma told you to?

Armored Armadillo: I'll fight you because it is my calling!

Armored Armadillo: There's nothing Maverick about following orders. We're not in the wrong, X.

Armored Armadillo: I'm under orders to destroy anyone who comes here. It doesn't matter who it is.

Vile: Ha ha ha... All you do is follow orders. You really think you can take me on?

Armored Armadillo: You don't respect authority. You don't follow orders. I pity you.

Vile: Pity!? Don't pity me! You don't know anything about me!

Armored Armadillo is the fourth Maverick that X fights in the Rockman X manga. He has the personality of a samurai, even using a sword, named Purple Garden. He first appeared in the forest Sting Chameleon was in and had orders to destroy X, but disobeyed Sigma's orders so he could fight one-on-one against the Hunter. Angry, Sigma scarred his left eye, but decided to let him fight. When X defeated him, he used his sword on himself, as a device on him would make him explode if he betrays Sigma. Vile exploded the local area that Armadillo and his soldiers were, killing them all except for X. Vile talked with X before leaving, giving him the location of an armor upgrade.

In the carddas, Mega Mission 3, Armored Armadillo is revived as "Armor Armarge HL", and attacks the Maverick Hunter base with three other Mavericks disguised as a recruit Hunter under the alias "Rot Armor". In his Hyper Limited form he has a predominantly red color scheme and wears a larger, heavier armor studded with spikes.

Armored Armadillo and most of the other Mavericks were cloned by Sigma-1 to create an army to challenge X and his heroic allies during Worlds Unite. 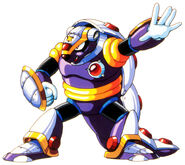 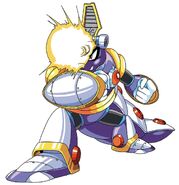 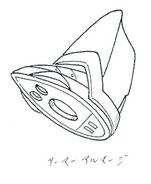 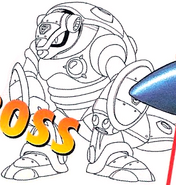 Retrieved from "https://megaman.fandom.com/wiki/Armored_Armadillo?oldid=277357"
Community content is available under CC-BY-SA unless otherwise noted.