Astro Man (アストロマン, Asutoroman) is a Robot Master who debuted in Mega Man 8. His original job was to work in a planetarium, but Dr. Wily stole him and modified him for combat. Astro Man uses his abilities to confuse his opponents and then attack them with either his two orbs levitating around him or his Special Weapon, the devastating Astro Crush. His weakness is Search Man's Homing Sniper, as it can home in towards his location quite easily.

Astro Man has a modest personality and is very shy. He's easily startled and is something of a coward, thus not being very reliable in battle. He is known to be the world champion at hide-and-seek and likes wishing upon stars in his spare time. He dislikes cheap humor and old gags.

Astro Man is one of the four Robot Masters dispatched to protect the barrier to the "Wily Tower" and was placed in a planetarium in the northeast of Europe, possibly Norway.

King revived Astro Man by using the data he stole from the robot museum in the Opening Stage.[1] He is one of the first three selectable Robot Masters in Mega Man & Bass, alongside Cold Man and Ground Man. He attacks with his two orbs, summons three Shururuns, and uses Copy Vision. Defeating Astro Man opens the stages of Dynamo Man, Pirate Man, and Tengu Man.

Astro Man appears on the Meteorite Surface in Africa with Stone Man, both of them sent to aid Aquarius. He later appears in the chemical plant level alongside Yamato Man and Dive Man.

Amount of damage in units that Astro Man receives from each Special Weapon in Mega Man 8 and Mega Man & Bass.

*Damage values listed for Mega Man & Bass assume the player does not have the "C. Attack" (Counter Attacker) item equipped and activated.

Astro Man appears in the manga Rockman 8 and Rockman & Forte, has a brief appearance in Sonic the Hedgehog #250 and in the end of Mega Man Gigamix vol. 3, and a cameo in the Mega Man comic from Dreamwave Productions. 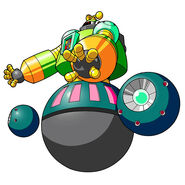 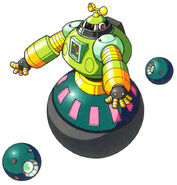 Cameo in the Dreamwave Productions comic.

Astro Man in the Rockman 8 manga.