Atlas (アトラス, Atorasu) is the Biomatch for Biometal Model F and a boss character in Mega Man ZX Advent, one of four Mega Men who participate in the Game of Destiny. She is fought in the Oil Field.

Atlas appears as a young woman with dual-toned spiky hair, the fringe being a vibrant orange and her hair itself being brown. She is characterized by her slightly thick eyebrows and fierce expression. Like her fellow Mega Men, she wears the typical ZX Mega Man vest with an orange coloration and a pair of boxing glove-like gauntlets that are purely that color, unlike the usual yellow cufts seen worn by others.

Due to the hair style Atlas has, which covers the forehead (aka; the location of the possible red triangle identifying reploids), it is impossible to tell if she is human/humanoid or reploid.

Atlas has an exceptionally aggressive disposition and values power above everything else. Having previously fought as a soldier in a country that has been ravaged by Mavericks, she developed the belief that human beings can only evolve during times of war and spurns peace, wherein survival of the fittest as the only justification; thus she plays the Game of Destiny in order to plunge the world into a never-ending state of war in order to spur on human evolution. It is therefore curious that she would cooperate with her Mega Man opponents such as Thetis, who wishes for the complete extermination of the human race.

Her aggressive personality is similar to that of Model F's persona, Fighting Fefnir; however, whereas Fefnir merely lived for the thrill of battle, Atlas is motivated by her hatred of weakness.

She first appears with Thetis in the Arctic Ice Floe. After introducing themselves, they MegaMerge. However, they don't fight the player. She uses her cannon to shatter the ice the player is standing on, leaving them to fight Chronoforce. She's encountered again at the Oil Fields, attacking the Raiders to feed their souls to Model W. She reveals that she wants to evolve humanity. After her defeat, her form is copied by Model A's A-Trans. She appears briefly with the other Mega Men when Aeolus's cipher is broken and in the Ouroboros after the defeat of the eight Pseudoroids. She and the other Mega Men are about to fight Grey/Ashe when Vent/Aile appears and holds them off. During the destruction of Ouroboros, Model Z separates from Vent/Aile and freezes the other Biometals and their Mega Men. Her fate is unknown, but if the game is beaten in Expert Mode, it is shown she and the other Mega Men are well and alive. 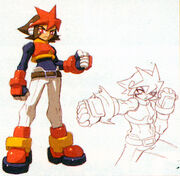 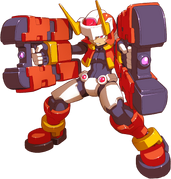 Atlas and Thetis in their Megamerged forms.

Atlas Megamerging and changing back.

Atlas along with the other Mega Men and Master Thomas.
Add a photo to this gallery

Retrieved from "https://megaman.fandom.com/wiki/Atlas?oldid=291778"
Community content is available under CC-BY-SA unless otherwise noted.