Atomic Fire is obtained by Mega Man after Heat Man's defeat. It is a projectile launched straight forward. It can be charged to increase its range and power, being able to deal great damage when fully charged, but also using more weapon energy.

Atomic Fire is Wood Man's weakness and also causes great damage to the Wily Machine 2 (1st form) when fully charged. Bubble Man, Boobeam Trap and Wily Machine 2 (2nd form) are immune to it. When used against Heat Man (in the rematch) and Alien, Atomic Fire will fully recover their health instead of causing damage.

Mega Man obtains Atomic Fire after defeating Heat Man in the Wily Castle. It functions like its appearance in Mega Man 2, but with the extra effect of being able to destroy the metallic blocks in the Wily Station to get the items blocked by them. If Mega Man is hit while charging, Atomic Fire is automatically fired at the charge state it reached.

Mega Man can use all the weapons from the first three Mega Man games in the Wily Tower mode, including Atomic Fire. Fire Snakey is immune to it.

Atomic Fire is obtained by Mega Man, Proto Man, or Bass after Heat Man's defeat in the Mega Man 1~2 course. In multiplayer, both players will receive the weapon. Unlike previous appearances, Atomic Fire now functions like Heat Man's attack, releasing flames in an arc and creating a small pillar of fire on the floor. It can be charged to increase damage and the size of the fire pillar. It is Wood Man's weakness.

Atomic Fire functions like its appearance in Mega Man: The Power Battle. It is obtained by taking the Special Weapon Item dropped by Heat Man after his defeat in the Search for Wily! course, being lost if it is not taken before disappearing. In multiplayer, only the first player to take the Special Weapon Item will gain the weapon. It is Plant Man's weakness.

Atomic Fire is obtained in Episode 1 in two different ways, depending of the path choosen by the player. The first is by defeating Heat Man, and the second is by receiving it from Guts Man, who finds Heat Man inactive and gives his weapon to Mega Man after Bubble Man's defeat.

It is Wood Man's weakness, but as Wood Man is the first boss from Episode 2, players must load a complete save from Episode 1 when starting Episode 2 to start it with the weapons obtained in the previous episode to use Atomic Fire against him.

*For Atomic Fire: the first digit is the standard shot, second is when it's charged more, and the third digit is when it is fully charged.
*Any data with a "+" represents the weapon actually restoring the boss's health.

In The Return of Dr. Wily, Dr. Wily made sure that if Mega Man managed to defeat his eight combat robots and copied their weapons, he would also obtain part of a virus created by him, which gradually makes him more aggressive. After defeating Heat Man and obtaining Atomic Fire and another part of the malicious coding, Mega Man destroyed Heat Man without mercy. This caused Dr. Light to figure out Wily's plan, and he began preparing an anti-virus. Mega Man later attempted to use Atomic Fire against Air Man, but it was ineffective.

Atomic Fire is an internal component that grants Heat Man the ability to launch flames from the holes in his palms. His Atomic Fire discharger is a pressurized blaster and, upon impact, the projected flames burst upward in a wall of intense heat. 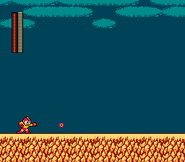 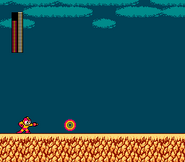 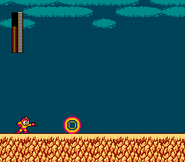