Atsuki is very arrogant, making fun of Mr. Match, an adult, several times. He's mostly calm but he has a bad temper and is a sore loser, exhibited when he loses to MegaMan.

He is Lan's opponent in the Eagle Tournament. Atsuki appears to Lan and Mr. Match while they're talking. He and Mr. Match start a debate about who's better at controlling Fire Navis. They decide to Netbattle which causes the whole Net to catch fire. Lan and MegaMan.EXE manage to convince BurnerMan.EXE and FireMan.EXE to stop fighting.

At the tournament, Lan and Atsuki NetBattle which results in Atsuki losing.

Mr. Match mocks him from the stands. This provokes him to order BurnerMan to set the place on fire. The machine catches fire which then ignites his whole body. He runs out engulfed in flames afterwards. His fate after that is unknown. 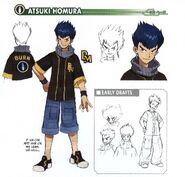 Concept art of Atsuki Homura.
Add a photo to this gallery

Retrieved from "https://megaman.fandom.com/wiki/Atsuki_Homura?oldid=293274"
Community content is available under CC-BY-SA unless otherwise noted.