Auto, known as Rightot (ライトット, Raitotto) in Japan, is a character from the original Mega Man series. Even though he was not introduced until Mega Man 7 and his origin is unknown, it is implied that he has been with Dr. Light for a while. He has a vehicle called Rightot'n Half-track and is an assistant for Dr. Light. He is often seen with Eddie. Auto is an inventor and creates items for Mega Man by using Screws/Bolts.

Auto has short appearances working for Dr. Light as a chauffeur. When Multi Man appeared to kidnap Mega Man, Auto tries to stop him, but he is taken down with one hit. He is later repaired and appears alongside Roll and Rush in the last issue to retrieve Dr. Light and Mega Man.

Auto considers himself to be Dr. Light's first real apprentice, and works hard to assist Dr. Light in his research in any way possible. Though his appearance may seem a little silly, Auto is actually quite skilled with things of a mechanical nature. Of course, he is still an assistant-in-training, so he makes his share of mistakes. Auto has a calming aura about him, and is often able to diffuse even the most tense situations.

In the story "Metal Heart", Auto transports everyone to the Mother Computer, but due to the excess of people on his half truck, Top Man, Snake Man, and Spark Man are left behind, and his truck ends with a flat tire.

In "Power Battle", Auto, Roll, and Rush go out shopping and enter in a store where the four Dark Mans are working. They decide to capture the three as hostages, but Bass, who was nearby and disliked their coward act, easily beats the four. However, Bass thinks that their idea isn't bad and kidnaps Roll, writing a message for Mega Man on Auto's back so he can find him.

In the story "Burning Wheel", Auto used Rush and Item-2 to create the Rush Roadstar so he could enter the Battle & Chase, and he also made the Super Adapter in the process. However, doing so left Mega Man without a transport, and he angrily takes the Rush Roadster from Auto. Auto still enters the race with his half truck in hopes of winning, but as its maximum speed is 150 km/h and the average speed of the leading racers is over 400 km/h, he is left behind. At one point he accidentally runs over Slash Man, and when he passes by Bass, who is attempting to pursue Mega Man on foot after crashing, Auto calls him an idiot. Bass heard what Auto said and increases his speed to catch him. Without choice, Bass takes a ride with Auto to reach Mega Man, often complaining of the speed and hitting Auto's head. In the end of the story they are still on the road long after the race's end.

Auto regularly appears in his own gag comic, "Dr. Auto's Laboratory". The plot always involves Auto inventing some new type of Robot Master to help Dr. Light, but despite his good intentions the robots all inevitably go haywire and explode spectacularly. 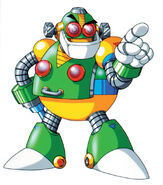 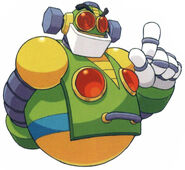 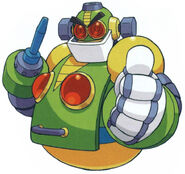 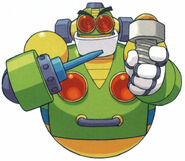 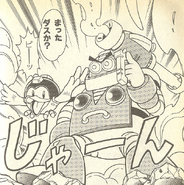 Auto in the Rockman 8 manga. 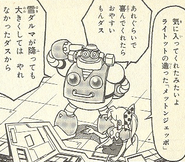 Auto in the Rockman & Forte manga.

Auto in the Rockman 11 manga.

Auto in a different pose.