Axl Bullets (アクセルバレット, Akuseru Baretto), also known as Axl Bullet,[1] is Axl's primary weapon in the Mega Man X series. The Axl Bullets are pistols capable of rapid fire shots, and Axl can aim the firearm at any angle.

Axl also uses the pistol to fire a Copy Shot, which allows him to obtain a DNA Core from specific enemies defeated with it. In Mega Man X7, with the exception of Circle Blaze, Explosion and Volt Tornado, Axl fires Special Weapons from his pistol. In Mega Man X8 Axl uses a different weapon for each Special Weapon.

Axl can fire the pistol while Rolling in Mega Man X7.

In Mega Man X: Command Mission, Axl Bullets are Axl's starting weapon, thus being the weakest weapon available for him. Axl can obtain other weapons during the battle against the Rebellion Army, including two stronger versions of the Axl Bullets named Axl Bullets 2 and Axl Bullets 3.

While Axl has two pistols and appears with them in several artworks, in the games Axl usually only uses one of them, only using both constantly in Mega Man X: Command Mission and Mega Man X DiVE (only in his introduction and Strafing Barrage skill, as players use other weapons in the game). In Mega Man X8, Axl only uses both pistols at the same time during a Double Attack. In Mega Man X7 he uses the Double Bullet instead of two Axl Bullets. While Double Bullet works like two Axl Bullets and are depicted as two Axl Bullets in Rockman X7 4Koma Manga Kingdom, they are different weapons.

Strafing Barrage (五月雨ショット, Samidare Shotto, lit. "Early Summer Rain Shot" or Intermittent Style Shot" in Japan) is one of Axl's Active Skills in Mega Man X DiVE. When used, Axl fires small bursts from his pistols erratically around him, hitting targets within range several times. The Player can improve the skill by equipping one of three Skill Cards that becomes available by increasing Axl's rank:

Pallette Bullets (パレットバレット, Paretto Baretto) is Pallette's standard weapon. It works in the same way as the Axl Bullets, except that it can't fire a Copy Shot as Pallette lacks Axl's Copy Chip. Like Axl, Pallette usually only uses one pistol, but uses two pistols during a Double Attack in Mega Man X8. In Mega Man X DiVE, Pallette only uses her gun during her Ion Gun skill.

In Mega Man X8, Pallette Bullets is also the name of an item in the R&D Lab that unlocks Pallette as a playable character when purchased. 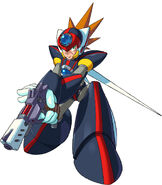 Axl with one pistol in Mega Man X7. 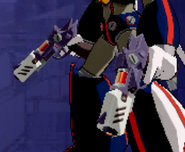 An Axl type Reploid dropping his pistol in the Rockman Online trailer. 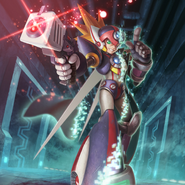 In the TEPPEN card Torchbearer Axl. 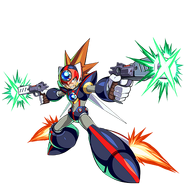 Axl using his pistols in the Archie Comics.

Axl (transformed) pointing his pistol to Vile in the Archie Comics.