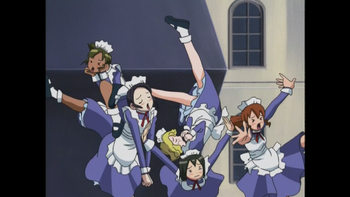 These maids are a group of girls who serve the Ayano family in the MegaMan NT Warrior anime series. Though The Ayano family has dozens to hundreds of maids in their employment, these ten particular maids are seen around and tending to Yai Ayano, watching over her and piloting her various vehicles.

The maids debut in episode 26.

The maids appear working inside the Ayanokoji Home.

When Kiryuuin Sakurako interrupts the Maid A as she trains other maids and attendants, she scolds Kiryuuin for being behind in her cleaning.

The maids later appear commanding Yaito's submarine in a training exercise that Tohru stumbles into. Secret of the Ayanokoji House!

All of Yai's maids search the world looking in various and random places for the princess's data for Yai's new game, Strawberry Princess.The Purloined Princess!

A few months later, they pilot Yai's spaceship, with Maid A defying gravity as they blast Lan and his friends into space to investigate the space debris around her space station.Space Junk!

Later, when Yai helps Lan and their friends return to space to reach Nebula's satellite, the maids pilot the spaceship again. When Keifer discovers what Lan did, everyone inside is reprimanded by him, who yells at them. Maid A covers Yai's ears for her.Get Dr. Regal!

Maids A and B pilot Yaito's latest aircraft to Japan, and put on anti-glare sunglasses when Yaito's enters the cockpit with her forehead shining. Those two and the others maids cheer Rockman on as he fights the Darkloids attacking the Yaito Memorial Dome. The maids then attends Yaito's “award ceremony” for “best for head” and watches Nenji's firework show. Offering of Deko Fireworks

The maids attend to Yaito when she goes on vacation with the Cross Fusion Members. They are flabbergasted when Netto and his friends ask if they can eat with Yaito after ruining their curry. At the end of the episode, Maid A bathes nude alongside the rest of the cast and interrupts Yaito and Anetta arguing. Summer! The Sea! Training Camp!

Maid A (メイドA, Maid A) seemingly is Yai Ayano's personal attendant and in charge of training new maids. Religiously faithful and loyal to her employer as her other maids, she is not satisfied unless Yai gets everything she wants. Despite her more prominent role over the other maids, this maid goes unnamed throughout the series, even though Maid G, Kiryuuin Sakurako, is.

?
Maid B (メイドB, Maid B) is dark-skinned with jungle-green hair in a hairclip and brown eyes.

?
Maid C (メイドC, Maid C) is a head maid[1] with black hair and pale skin. She has a beauty mark under her left eye.

?
Maid F (メイドF, Maid F) has shoulder-length wavy blond hair with a half bang, blue eyes, and freckles. In episode 52, her hair is shown to be longer than normal.

Kiryuuin Sakurako (鬼龍院桜子, Kiryuuin Sakurako), refered as Maid G (メイドG, Maid G) in concept art, known as "Sapeeko"[2] in the English dub, is the only maid that had her name revealed. A young rookie among the maids, Sakurako is clumsy and accident-prone, often effecting people around her. A gag at the end of the first season has the cast yelling her name and her apologizing profusely when she messed up.

She is around Yai's height and has long light maroon-pink hair tied into a braid with a red ribbon at the end and brown eyes. She has pink ovals on her cheeks. She wears a pink maid outfit rather than the purple outfits the other maids wear.

?
Maid H (メイドH, Maid H) has black hair that is pulled back into a bun, showing off her forehead. Her eyes are always closed.

?
Maid I (メイドI, Maid I) has long light black put into a long braided ponytail and black eyes. She wears red rimmed glasses.

In the episode Secret of the Ayanokoji House!, several maids are seen being trained by Maid A inside the Ayano home.

Maids A to J in one shot.