Mega Man X first encounters them in the Opening Stage when they are dropped by Bee Bladers. They also appear in Storm Eagle's stage, Spark Mandrill's stage and the first Sigma stage in Mega Man X.

A Ball De Voux's only means of attack is to trample its enemies.

Amount of shots/hits from Special Weapons it takes to destroy a Ball De Voux.

Ice De Voux (アイス・ド・ボー, Aisu Do Bō) is a variation of the Ball De Voux that appears in Blizzard Buffalo's stage in Mega Man X3. If hit, its protective ice shell will shatter and it will try to create a new one unless it is destroyed immediately. It is automatically destroyed if it falls on spikes.

Iwan De Voux (イワン・ド・ボー, Iwan Do Bō) is similar to Ice De Voux, except it has a 3-hitpoint shell made of rock, and is native to Tunnel Rhino's stage in Mega Man X3. Its modus operandi is the same as Ice De Voux. Its name is derived from the word, "iwa (イワ)", which means "stone" in Japanese.

Mega Man X7
Rockman X DiVE
Ball De Voux Shot Type is a green Ball De Voux from Mega Man X7 equipped with a cannon. They attack by standing and firing slow long-range energy shots; however, their limited field of view makes them blind to targets positioned below, behind or beside them. Shot Types appear in the same stages as Normal Types, except Palace Road.

When B Blader is defeated, and Deerball takes its turn, it loses the ability of auto-recovery and reduces its Speed by 25%, and also if the player win the battle in this condition will receive only 1/4 of the EXP which normally gives that Deerball.

The original variants of the Ball De Voux appeared in the issue 34 story "The X Factor - Part 1", where they were aiding Dr. Cain in his archaeological expedition when he uncovered the remains of Light Labs.

Ball De Voux Normal Types from Mega Man X7 appeared in Sonic Universe #76 as the first Mechaniloid Maverick minion that Sigma makes on the Lost Hex in his plan to take over all worlds in Worlds Unite.

Ball De Vouxs appeared in the Maverick attack in a highway and in the army that surrounded X and Zero in the forest.

In the Rockman X3 manga, Ice De Voux or Iwan De Voux can be seen among the Mavericks that attacked the Neo Maverick Hunter Base. 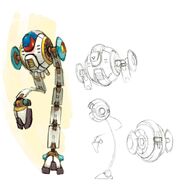 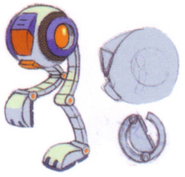 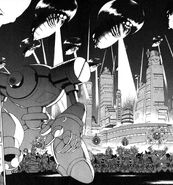 Rockman X3 manga
Add a photo to this gallery

Retrieved from "https://megaman.fandom.com/wiki/Ball_De_Voux?oldid=321944"
Community content is available under CC-BY-SA unless otherwise noted.