Ballade (バラード, Barādo) is the third and last "Mega Man Killer" robot built by Dr. Wily. Ballade has great pride and believes he is the strongest robot. Ballade attacks with a powerful explosive called the Ballade Cracker, and has a second form that increases his strength.

Ballade's greatest strength is his love for taking on challenges, making him seem like a simplistic individual, though it is shown that he is capable of deeper thought. He often likes to boast about being the best, often proving himself by fighting robots that he thinks look strong, and dislikes opponents who have no competitive or fighting spirit.

After defeating the first four bosses, Mega Man invades the Wily Station and fights against Ballade inside. Ballade escapes when he has 1 HP left. Later, after defeating the second four bosses, Ballade appears again and transforms into a more powerful form, but he is defeated and Mega Man obtains his Ballade Cracker. After losing twice to Mega Man, he realizes his mistake and sacrifices his life to save Mega Man in the game's ending by self-destructing to open the way for Mega Man from the exploding Wily Battleship.

Ballade is the fourth boss fought inside the Wily Star, copies of him being made alongside the previous 3 bosses (Enker, Quint, and Punk). He now has a weakness, in both the Bubble Bomb and the Photon Missile, and is only battled in his original form. After his defeat, there is a rematch against the Stardroids, except Terra.

Ballade is the boss of the downloadable Special Stage 3. He usually appears in his original form, although it may be a random chance of seeing him change to his alternate form. There doesn't appear to be any difference between his two forms, however. Because of this being rendered in NES-style graphics, this is also his first color appearance in a video game (not counting his database bio in Mega Man & Bass).

Displays the amount of damage in units that Ballade will receive from each Special Weapon in Mega Man IV, Mega Man V, and Mega Man 10.

Ballade has a cameo appearance in issue 20, where the Mega Man Killers and the Genesis Unit invade the Chronos Institute.

He also appears in Worlds Collide, alongside the rest of the Mega Man Killers, to stop Mega Man, Sonic, Tails, and Rush from attacking Drs. Eggman and Wily. Mega Man's interactions with Ballade indicate that he had previously encountered Ballade and sacrificed himself similar to in Mega Man IV, although he soon realized the "Ballade" that is attacking him was from a prior timeline when Ballade expressed ignorance of saving Mega Man's life. Tails, Sonic, and Mega Man managed to finish him off, although not before he managed to significantly injure Tails with one of his Ballade Crackers.

Ballade appears in the three small side-stories of the Rockman & Forte manga. In one of them, Rockman Burning Shot, he fights against Bass to decide who will face Mega Man, and he is defeated.[1] In the other two stories, Arigatou Rockman and Onore Rockman, Ballade is depicted as a rascal that tries to cause trouble for Mega Man, but all his attempts end in failure. He also causes trouble for Wily's other robots.[2]

Front, side, and back view of Ballade. 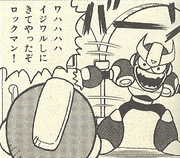 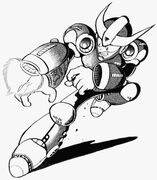 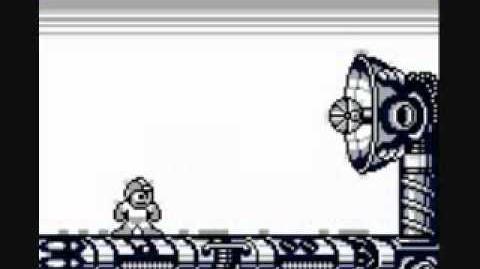 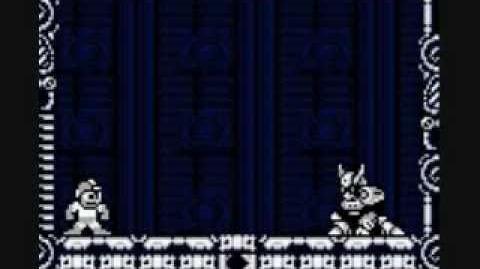 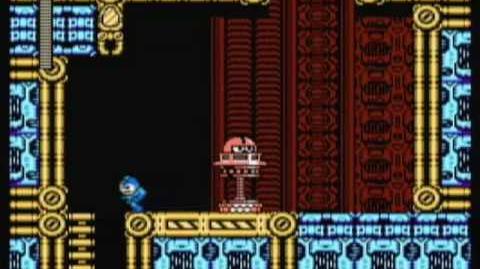