Fallen Giant of the Forest
(墜ちた森の巨人)

"What wishes for destruction...is this world. We're just helping it along and giving it what it wants..."
―Bamboo Pandamonium, Mega Man X8

Bamboo Pandamonium, known as Bamboo Pandemonium (バンブー・パンデモニウム, Banbū Pandemoniumu, a one letter difference) in Japan, is a calm New Generation Reploid from Mega Man X8 based on a giant panda.

Pandamonium was in charge of the rocket center in Booster Forest, a space research facility in China used before the Jakob Orbital Elevator was built. After it was abandoned, Pandamonium stayed at the facility. When he became a Maverick, he collected data on the rockets in the facility for Sigma.

Bamboo Pandamonium was a massive Reploid, easily standing twice as tall as the Maverick Hunters. His body was mostly white and black in color, similar to a panda, and he had the head of a panda as well - the resemblance was much closer than other animal-based Reploids, even possessing black eyes. The tubes and canisters on his back were green, meant to resemble bamboo shoots. His fingers were composed of three large claws, which he could extend and retract into his forearms at will.

Bamboo Pandamonium was level-headed and thoughtful. He was aware that he had been labelled Maverick, but saw it as more of a pity and a hindrance than anything. He believed the world wants to be destroyed, as its history has been spent making destructive things like missiles and Reploids, and he liked Sigma's plan to create a new world.

Pandamonium's main attacks consist of his Green Spinner missiles and the occasional bamboo-shaped drills that will grow from the ground to act as walls. These walls can be used to Wall Jump, and can only be destroyed by fire-based weapons or by Pandamonium himself when he smashes through them.  He can also launch grenades from his back similar to those fired by Axl's Blast Launcher (these are not time delayed, however, and explode on impact).

If the player gets very close to him, he will lunge and trap them in a bearhug if contact is made. The way to break free from the grab is by switching Hunters.

In Overdrive, he will try to lunge at the player (might be the Youdantotsu), which is almost instant death if it connects. He will also fire a rapid barrage of missiles, some of which will come down from the sky.  He's weak against fire, so the weapons gained from Burn Rooster are effective against him.  Zero's D Glaive can also be very effective, as it can reach Pandamonium through the bamboo drills.

Alia: The target is a power type Reploid. It possesses incredible attack strength. Be careful not to get caught up in the close range attacks!

Layer: It has the ability to attack targets from a great distance, though it seems that its greatest asset is its powerful close range attacks. Its defensive power is too strong. If only we had some sort of powerful weapon... We could attack it head-on from the front and break through its powerful defenses.

Bamboo Pandamonium: You mean to tell me you've never thought such things yourself, Zero? That the world wishes for destruction and nothing more? Zero: Is that what Sigma tells you? Bamboo Pandamonium: Perhaps. Perhaps my master has also seen a little of himself inside of you... Zero: Whatever. It's finished between me and Sigma. Bamboo Pandamonium: What will end, Zero, is this world.

Bamboo Pandamonium: You have the same copy ability that we new generation Reploids enjoy. Why do you think my master overlooked you when he assembled the others? Axl: Your joy at being chosen by that worm proves just how Maverick you've become! Bamboo Pandamonium: It's because you are not needed in our new world.

Pandamonium was one of many Mavericks cloned by Sigma-1 during the events of Worlds Unite. Unlike most of the Mavericks featured, he was not known to have engaged the Maverick Hunters previously due to the events of Mega Man X8 not having taken place at the time of the crossover. 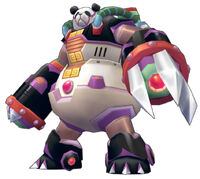 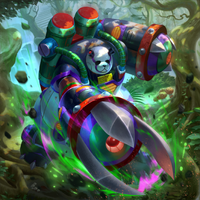 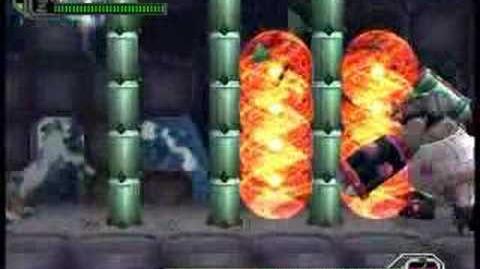 Megaman X8 Boss Bamboo Pandamonium Hard mode no damage
X vs. Pandamonium in the Gateway
Add a photo to this gallery

Retrieved from "https://megaman.fandom.com/wiki/Bamboo_Pandamonium?oldid=352701"
Community content is available under CC-BY-SA unless otherwise noted.