Barrell Caskett (バレル・キャスケット, Bareru Kyasuketto) is a character from the Mega Man Legends series. He is Matilda's father and Roll Caskett's grandfather, and took MegaMan Volnutt under his care when he found him as a baby. Barrell is a respected professor and well-known retired Digger who used to travel the world with Von Bluecher to uncover ancient civilizations, and because of his exploits he used to be called "Barrell the Invincible" (不死身のバレル, Fujimi no Bareru).[2]

30 years before Mega Man Legends 2, Barrell and Bluecher made an expedition to Forbidden Island, designing a ship with a rounded aerodynamic hull reinforced to withstand the atmospheric pressure above the island to enter by the eye of the storm. They managed to land on the island, but the ship was destroyed and they could not return. In the island, they were shocked to find Reaverbots active even above ground, and without their equipment, had to struggle to survive against them and the harsh weather. They manage to reach the center of the island, where they see a strange floating diamond-shaped object (were Sera and Geetz are sealed) and a mysterious girl (Yuna) before passing out from tiredness. When they awakened, they somehow were near Yosyonke City in the Calinca continent, being the only ones to return. This mystery puzzled them for years until Sera was freed.

20 years later, Barrell's daughter Matilda and his son-in-law Banner decided to go to Forbidden Island, even through Barrell warned them not to. They didn't return, and believing the two had died, Barrell took care of his granddaughter Roll.

One day, Barrell snuck inside the Nino Ruins without the Guildmaster's permission to do research on previous civilizations. Just inside the entrance, he found a strange, diamond-shaped object that "melted" when he touched it, and from inside appeared a baby and a monkey (Data). As Barrell had entered the ruins without permission, he could not reveal where he found them, and decided to raise them alongside Roll, naming him MegaMan Volnutt. When MegaMan grew he became a Digger, and Roll is his Spotter. Barrell uses all his experience and knowledge to advise them.

Early in the game, the Flutter crash-landed in Kattelox Island, and the Inspector takes Barrell to talk with the mayor of the island's city about the incident. To his surprise, the mayor is Amelia, a woman that used to be his assistant, and he stays in City Hall for a while to talk with her. When the Bonnes attack the island, MegaMan fights against them to protect the city, including Barrell as he was in City Hall and Roll is worried with him, but he doesn't get hurt. After the Flutter is repaired, Barrell returns to the airship and stays inside for the rest of the game. He is amazed when a large monolith (Eden) appears over the island, and later wonders if it has some relation with what happened in the island's ruins.

One year after MegaMan and the Caskett family left Kattelox Island, Barrell received an unexpected letter from Bluecher, which says he wants to try exploring Forbidden Island again, despite how dangerous it is. Bluecher used the last of his fortune to create the Sulphur-Bottom, a giant airship able to withstand the weather of the island. Barrell decides to meet Bluecher, not knowing what will come of it, and participates in his press conference. For his surprise, he sees his missing daughter Matilda alive, but she is acting strange and gives a warning to them about the Mother Lode and Forbidden Island, and leaves the airship with a flying Reaverbot. Bluecher ignores her warning and proceeds to the island, and Matilda attacks the Sulphur-Bottom again, but Gatz accidentally damages its engines and the airship is stuck in the storm, not being known how long it can stay in the air. Roll and MegaMan rush to Calinca to find a way to rescue them by using a Dropship, and MegaMan goes to the island, finding the same strange diamond-shaped object Barrell saw 30 years ago. Unknowing what it is, MegaMan frees Sera and the storm stops, saving the Sulphur-Bottom and its crew. During the rest of the game, Barrell stays with Bluecher in the Sulphur-Bottom, where he gives advice to MegaMan. He appears in the ending with Bluecher and Teisel talking about the rocket being built by Roll and Tron.

Barrell was confirmed to appear in the cancelled game Mega Man Legends 3. He isn't present in the Prototype version, Roll stating that he's been missing for a while. His role in the game is unknown.

Barrell, as he would appear in Mega Man Legends 3. 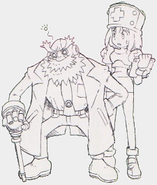 Early concept art of Barrell with an assistant.
Add a photo to this gallery

Retrieved from "https://megaman.fandom.com/wiki/Barrell_Caskett?oldid=339475"
Community content is available under CC-BY-SA unless otherwise noted.