Barrett (バレット, Baretto), also known as Bullet by some fans, was to be a playable character introduced in the cancelled Mega Man Legends 3.

In Mega Man Legends 3, Barrett was a teenage boy with red hair arranged in a spiky ponytail. He wore biker goggles, a white and orange jacket, dark gray pants, a belt and beige boots and gauntlet-like gloves. Barrett also had a metal plate on the left side of his face and a gun attached to the side of one gauntlet. His arm gun seemed to be used in the same way as Volnutt's Buster, although he had been shown to be more agile than him and relied more on melee combat, having been able to perform dash-like maneuvers and a flaming kick similar to Zero's Enkōkyaku from Mega Man X8. The latter ability seemed to be available only after Barrett equipped a set of red boots called Volcanic Leggings.[1] Barrett could have also performed combos with punches and kicks,[2] as well as ran up walls and performed long jumps by sprinting.[3] And, as the leader of a sky biker gang, he would have had a flying motorcycle.[4]

Barrett was dutiful and passionate, but had a reckless personality and even went a little berserk at times.[5][6] With a passion for adventure, he spent his days thrill-seeking and getting into trouble.

Barrett would have been the leader and educator of Klickelan Island's weakest gang, the Bright Bats. He was training the sky biker gang hard so that they could rise to the top.[7] Aero would have been his spotter.

He was well-versed in the art of digging and he seemed to have some connection to Roll and the Bonnes.[7] 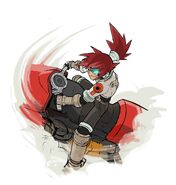 Barrett on his bike.

Retrieved from "https://megaman.fandom.com/wiki/Barrett?oldid=317516"
Community content is available under CC-BY-SA unless otherwise noted.