Baryl, known as Barrel (バレル, Bareru) in Japan, is the adopted son of Wily in the Mega Man Battle Network series and the operator of Colonel.EXE.

He is a former Supreme Commander of Netopia's Network Corps. While in the forces, he managed to achieve victory in a battle against unsurmountable odds, as a result he became known as the "Invincible Baryl" (ふじみのバレル/不死身のバレル, Fujimi no Bareru).[1]

Baryl's father,[2] a Netopian Commander, recruited Wily to research military robots in Netopia. A few years pass and when his father went off to war, Wily watched over Baryl. A few more years later, it's revealed Baryl's father had died, and reignited Wily's ambition to take revenge on society. But before he could, he used the soldier data given by Baryl's father to train Baryl into a better soldier than his father ever was.

About 20 years before Mega Man Battle Network 6, Wily created Colonel.EXE for Baryl. Baryl has said Wily's eyes shined brightly with kindness. Colonel was the perfect NetNavi because of his tactical prowess, ability to control electronic devices, and kindness. The day Baryl's father died, Wily took Colonel away from Baryl and removed his kindness and electronic control programs, using them to create Iris.EXE. Baryl says that Colonel was never the same after this. Wily stated that this event was the point where he threw away his own kindness.

Some time later, Baryl became a Netopia team captain for Karate. In this time, he defeated the foreign college student, Joe Mach. The two became trusted friends as Baryl mentored Mach in Karate, said to be due to their closeness in age.

In Team ProtoMan version: Colonel first appears to rescue ProtoMan.EXE from the Dark Soul and once again to assist Team ProtoMan to delete Nebula Gray. Baryl appears in the game's finale after its deletion, revealing himself to be Colonel's operator. Regal recognizes him as the Supreme Commander of Netopia's Network Corps. Baryl states someone (Wily) tasked him with destroy Regal's Soul Server. He evacuates with Team ProtoMan from the exploding Nebula base.

In Team Colonel version: After Nebula's revival in the last game, Baryl and Colonel test Lan Hikari and MegaMan.EXE to see if they can join Team Colonel, which they pass. Baryl displays a tough attitude throughout the game and is a capable leader. He doesn't stand for weakness though, like when Lan refused to act after MegaMan was captured. He remains calm and controlled even when Colonel was supposedly deleted. After discovering Nebula's base, he leads them on an attack to end their threat. The finale plays out the same as Team ProtoMan, but Dr. Wily also appears and it's shown that Baryl comes back to rescue Dr. Hikari and Dr. Regal from the volcano. He disbands Team Colonel later. When Lan asks who he is, he says that he is no one special, just Baryl.

Baryl and Colonel have joined the WWW and commands the other members, even though he joined late. He is harsh and strict, which creates discontent among the other members. Baryl and Colonel fight and lose to MegaMan and Lan in the Underground. Lan talks to him and Baryl has doubts about what he is doing. Yuika, Vic, Blackbeard and Ito get mad that Baryl is bossing them around so they split from the WWW. After Blackbeard is arrested, they kidnap Iris and use her to lure out Baryl. Ito and Vic beat up Baryl and are about to kill him when Joe Mach arrives and fends them off.

Baryl appears again in the final battle against the Cybeasts and sends Colonel to fight them, but collapses because he is badly injured. When Falzar and Gregar are defeated, he stays behind in the exploding room. However, at the end, Ms. Mari gives Lan a CopyBot, saying it was from a man with Baryl's features. In the credits, he is seen walking past Ms. Mari.

Barrel's role in the anime is more complex. By the time the events on Stream begin, Barrel is already in his fifties and paralytic, though he appears to be even older than that. He dies shortly after the beginning of Stream, but not before he convinced Dr. Wily to abandon his schemes of taking over the Network and requesting him to build a machine called the "Time-Space Saber" to allow for Navis to time-travel.

A younger Barrel decades in the past makes a recurring appearance when the series tackle time travel episodes. He is seen ready to assist Netto and Rockman in any way in he can.

Barrel and Colonel have parallel versions in Beyondard that helps Netto fight against the Zoanoroids. He is firstly seen in episode 14 saving Netto from a virus stampede. He returns some episodes later, in episode 20, having failed a mission to try to infiltrate Glaga's main base and try out a new weapon against it. Colonel was infected by the Beast Factor as a result and become a Zoanoroid, although he is later temporarily restored by the combined efforts of Iris and Trill. He bids farewell to the people from Earth once the Beast Factor of Beyondard has been wiped out. 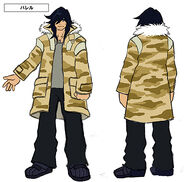 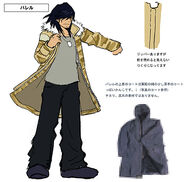 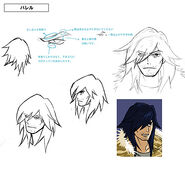 Baryl in a Battle Story MegaMan NT Warrior one shot.