Bass Cross MegaMan, known as Forte Cross Rockman (フォルテクロスロックマン, Forte Cross Rockman) in Japan, is the name for the Cross transformation of MegaMan.EXE based on Bass.EXE. There are two variations, a gold (power-type) and a silver (speed-type)[1].

In the Game Boy Advance version of Mega Man Battle Network 5, Bass Cross was made available in two different forms: a gold form only available in Team ProtoMan, and a silver form only available in Team Colonel. The forms could only be acquired in the Japanese version of the game by the use of a special e-Reader card given out during Rockman.EXE/Duel Masters promotional double feature movies. Keeping the form on and going to 2 certain locations in the game, will unlock special cutscenes and a fight against the real Bass, which otherwise doesn't make a appearance in the game.

The same e-Reader Card can also be used in the Japanese version of MegaMan Battle Network 6. This time gold's abilities for Gregar version, and silver's abilities for Falzar version. It will give the same abilities as in BN5, but MegaMan's visual form won't change.

In the Wii U Virtual Console version, Bass Cross MegaMan is given to the player when they access the Network menu, along with all exclusive battle chips unobtainable in the version being played.

Both versions inherit Bass' unique features, such as cobra-like dual crests, the torn scarf and imitation of Bass' scar on the emblem point. A green gem is placed on the forehead, and the mask now covers the whole face by default. Disc-like extensions are placed along the joints and shoulders, with purple lines run across the body.

Available in Team Colonel and Cybeast Falzar. This is considered the Speed-type.

Forte Cross Rockman appears in the anime during the Japan-exclusive movie Rockman.EXE: Hikari to Yami no Program.

During their confrontation with Dr. Regal in the bowels of an abandoned Ameroppa military base, Netto and Rockman are joined suddenly by Forte, who is enraged for having earlier been brainwashed by Nebula Gray to serve the doctor. As Regal rises into his "vessel" above, Forte and Rockman followed.

While they're occupied, Regal summons Nebula Gray to capture them and drain them with wires. Unable to do anything and being drained of their power, Rockman turns to Forte, begging him to take his Ultimate Program - as it's their last chance defeat Nebula Gray and stop Spectrum. Netto pleads to not do it, but Forte was too happy to oblige. During the absorption, Forte realizes the power was too great even for him, tearing him apart and screams. There is a great explosion of power - as it dies down, a Gold Forte Cross Rockman emerges.

In his final escape, Dr. Regal summons a strange black hole portal. Netto is unable to plug out Rockman as Forte Cross Rockman is being sucked in by the portal. Regaining consciousness, the two split. Forte blasts away Rockman, allowing him to plug out. Forte laughs madly as he disappears into the vortex.

Bass Cross MegaMan first appears in Volume 11 of the manga, during the final battle against Nebula Gray. Notoriously given the name, Legendary Berserker.

When everyone except MegaMan, Bass, and Colonel are defeated by Nebula Gray, MegaMan asks Bass to perform Double Soul with him. Bass rebuts with an attack, reminding him that they are enemies and it's impossible for them to work together since they can only understand each other through fighting. Just as Nebula Gray's attack hit Bass, MegaMan pushes him out of the way and fatally injuring his body. To save MegaMan's life from deletion, Bass absorbs him, fusing into Bass Cross MegaMan.

Bass Cross MegaMan easily overpowers Nebula Gray until he receives damage to his body due to inability to withstand the fusion of Bass and MegaMan's power, something even Recovery BattleChips can't heal. As Bass Cross MegaMan decides to finish Nebula Gray, Cosmoman reveals ProtoMan, Tomahawkman, and Gyroman from Nebula Gray's stomach and threatens that they will be destroyed if he continues. Bass Cross MegaMan defends himself from the coming attacks instead of continuing to attack.

In their united minds, Bass scolds MegaMan but was ultimately amused by MegaMan's need to win without sacrifices. Finally, Colonel opens a path with Screen Divide, allowing Bass Cross MegaMan to land the final attack. However, it turns out that Nebula Gray is able to survive the attack by fusing with Cosmoman. Bass pushes MegaMan away, splitting the form. Without the powerful form and no allies by his side, MegaMan seeks new power.

Bass Cross appears again in a "Legendary Berserk" special chapter that takes place after the battle against Nebula Gray. MegaMan is part of the team of special Navis that have been ordered to delete the Devil Virus. On their way to face the virus, MegaMan sacrifices himself to protect Numberman from a virus' attack. While MegaMan was floating as his data started to disperse, Bass appears and absorbs him. Just before the virus destroyed the last line of defense, Bass Cross MegaMan arrives in the nick of time and effortlessly destroys the virus. Bass diffuses with MegaMan and leaves the scene as Colonel comments how the world is once again by the one that hates the world more than anyone (Bass). 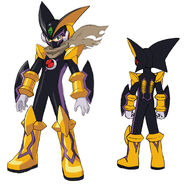 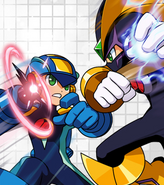 MegaMan.EXE VS Bass Cross in Rockman ×over.