Battan (バッタン, Battan) is an enemy in Bright Man's stage from Mega Man 4 and the Game Gear Mega Man. As all it does is hop in a fixed trajectory, it is more of a friend to Mega Man than an enemy, as it doesn't cause damage and can be used by him as a transport to get past the large spike gorges in the stage without Rush Jet. The player must be cautious though, as some Battans will jump into pits, killing them instantly, taking Mega Man with them if he doesn't jump. Also, there are Totem Polens in the way that can knock Mega Man on the spikes. 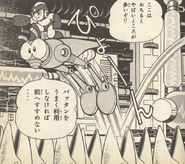 Battan in the Rockman 4 manga.