A Battle Chip Gate (バトルチップゲート, Batoru Chippu Gēto) is a device created by Capcom and Takara to be used with toy PETs and in games from the Mega Man Battle Network series. Unlike the PET, Battle Chip Gates don't feature any kind of interface or the ability to house a NetNavi; instead, they can only be used to transfer Battle Chips to remote NetNavis, even NetNavis that don't belong to the operator.

Note that the Battle Chip Gate, Progress Chip Gate, and Beast Link Gate and their toy Battle Chips aren't compatible with each other.

The Battle Chip Gate is an accessory created for Mega Man Battle Network 4. It can be connected to the Game Boy Advance and allow the player to transmit real-life toy Battle Chips to the NetNavis in the game in Operation Battles. The Battle Chip Gate can also be used with toy Advanced PETs and in Rockman.EXE 4.5 Real Operation.

In the anime MegaMan NT Warrior, the Battle Chip Gate is also used to send Battle Chips to humans who are transformed with Cross Fusion or remote Navis, or to even activate Battle Chips that don't require a NetNavi for the effect (such as field-altering Battle Chips like RockCube (which can still crush opponents) or Grass Stage instead of swords or projectiles. Although, it can still activate certain offensive chips like Flame Tower, MiniBomb, and TimeBomb, or even use certain Battle Chips to summon their virus counterparts, e.g. Cannon summons Canodumb, Guard/Shockwave summons Mettaur, Life Aura summons Scuttlest, DashAttack summons Fishy, Train/Trident Arrow summons Piranha, etc. Sword Chips have never been activated on their own by the Battle Chip Gate.

In Rockman.EXE Beast and Beast+, Beast Link Gates are used as PETs by the residents of the parallel world Beyondard, regardless that they lack of an interface for viewing the NetNavis they house. 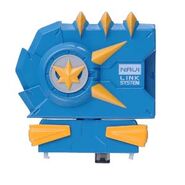 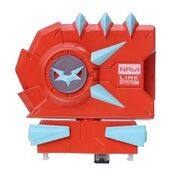 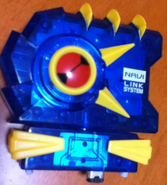 Beast Link Gate (Netto Version)
Add a photo to this gallery
Retrieved from "https://megaman.fandom.com/wiki/Battle_Chip_Gate?oldid=210163"
Community content is available under CC-BY-SA unless otherwise noted.