Bee Blader (ビーブレイダー, Bībureidā) is a large bee-type helicopter Mechaniloid created for the purpose of transporting Ball De Voux.[1] Built for guerrilla warfare they are suited for operations in the forest or city.[1] Bee Bladers attack by firing their machine gun, launching guided missiles, and dropping Ball De Voux to assist them. If X is standing underneath one as it falls from the sky in defeat, he will be crushed.

Amount of shots/hits from Special Weapons it takes to destroy a Bee Blader.

Recovers 25% of all allies max LE.

They attack similarly to their previous incarnations, even deploying Ball De Voux (referred to as Deerballs in-game). Many of the B Blader's attacks have the added effect of inflicting harmful status effects on the players party. B Bladers also assist Deerballs by recovering some of their health each turn. Run away only when alone after its seventh turn.

Gold Blader (ゴールドブレイダー, Gōrudobureidā) is a rare golden variant of B Blader from Mega Man X: Command Mission that only appear in Vanallia Desert's Quicksand North Side. They drop Silver and Gold Mettaurs instead of Deerballs, and tend to run away. Also, for each turn that Gold Blader is damaged and is not defeated, it halves the Zenny left by the Gold Blader gained in battle. The Zenny minimum gained is 0. It runs away in its second turn onwards.

A broken Gold Blader can be found in Gimialla Mine's L3 Southwest Division after obtaining the Gimialla Key. It requires a Heavy Motor to be repaired and becomes available for use in the Deployment Center afterwards.

A Mechaniloid similar to the Bee Blader was briefly seen in the opening of the OVA The Day of Σ included in Mega Man: Maverick Hunter X, where it transported Mega Man X to the drop point to fire his charge buster at a maverick mechaniloid during a Maverick Hunter operation.

In the 39th issue of the Archie Comics serial of Mega Man, Xander Payne, when apprehended in X's time for his connection to the Emerald Spears, was placed on board a Bee Blader to be escorted to prison, although because of the effects of the time-skimmer, he was sent back in time before it lifted off with people witnessing it in shock. They also appear in the first part of Worlds Unite helping the Maverick Hunters storm Sigma's arctic base before being destoryed by Turn Cannons.

The Sub-boss of Dangan Man's stage in Rockman & Forte: Mirai Kara no Chousensha resembles a smaller version of the Bee Blader, though it behaves differently, shooting 3 homing projectiles and switching to the other side of the room when all projectiles are destroyed. 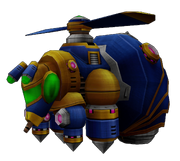 Bee Blader as it appears in Maverick Hunter X

Concept art of the Bee Blader drop ship that appears in the opening of Mega Man Maverick Hunter X's The Day of Σ OVA.

The Graphical evolution of the Bee Blader.

Retrieved from "https://megaman.fandom.com/wiki/Bee_Blader?oldid=323020"
Community content is available under CC-BY-SA unless otherwise noted.