Bert Wily is a human who appears in Mega Man: Fully Charged. He is based on Doctor Albert W. Wily, though unlike his original counterpart Bert is friends with Aki Light/Mega Man, and is the same age as him.

Bert has spiky orange hair, green eyes, and freckles. He wears a pink and red shirt with a W logo on it.

Bert has an aptitude for mechanical inventing. Over the course of the series he has created several inventions, including a video drone called the Wily Copter, though his youth and naivety often make his inventions malfunction.

In "License to Drill" he is shows to have a good control over his board, considerating the board was unfinished and act erratically.

Wily Copter: He modified the Suna Drone with parts of his bike, in turn adding heat resistance to it.

Wily Pants (2.0): Cybernetic pants which enhance his speed. In "All Play and No Work" the electric problems were fixed. Its design is reminiscent of the Wily Machine 7.

Speed Chip: A device that enhances a machine's speed, but is buggy and tend to make machines malfunction.

Bike:  Bert owns a bike that has a skull reminiscent of his older counterpart from the games.

Proto Sky Board: A white fast floating board. Look line surf board with truster. Being a prototype the board have problems of stability making hard to use. He often uses a red bicycle helmet with a orange glasses added while riding it.

Bert Wily, along with all the other characters, in the opening of Mega Man: Fully Charged. 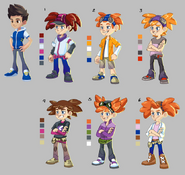 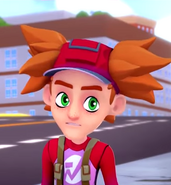 Bert with his hat on.

Retrieved from "https://megaman.fandom.com/wiki/Bert_Wily?oldid=296746"
Community content is available under CC-BY-SA unless otherwise noted.