Big Eye (ビッグアイ, Biggu Ai) is a one-eyed surveillance robot with high defense that tries to crush its enemies. In the first Mega Man game, a single Big Eye appears in the stages of Cut Man (red), Guts Man (blue), Ice Man and Elec Man (red), and three metallic Big Eyes appear in the beginning of the final stage. They also appear in the first part of the Wily Tower in Mega Man: The Wily Wars. In Mega Man Powered Up, the Opening Stage boss is a larger Big Eye called Proto Eye that attacks with laser orbs and stomps.

Big Eyes are vulnerable on all parts of their body in the first game, while in Mega Man Powered Up their only weak spot is the eye, which closes when at rest. In Mega Man: Dr. Wily's Revenge, Big Eyes can only be damaged while they are jumping and appear in the stages of Cut Man, Ice Man, Elec Man and both Wily stages (Wily Castle and Wily Station respectively).

A robot made to monitor enemies. This strong foe boasts high defensive capabilities. Freeze with your ice weapon, and then attack.

Amount of shots/hits from Special Weapons it takes to destroy a Big Eye.

The Big Eye has two jumps: a high jump and a low jump. Big Eye will home in on you using these jumps. What determines which jump the Big Eye uses is pure randomness, so strategy is unfortunately limited. In most cases, it's not worth killing a Big Eye, as it takes too many hits and puts you at risk of colliding with it, and it deals a lot of damage. Instead, let it pass you with a high jump. Big Eyes are weak against Super Arm, Thunder Beam, and Hyper Bomb (although the latter is not ideal). Although Big Eyes aren't damaged by Ice Slasher, they will be frozen, making fighting or passing by them significantly easier. It is best to freeze them at the peak of their high jump so you can walk underneath it safely.

Mega Man: Powered Up
Proto Eye (プロトアイ, Puroto Ai) is the boss from the opening stage of Mega Man Powered Up. It is a larger, grey-colored version of a normal Big Eye that Dr. Wily sends after the player to cover his escape.

Proto Eye can attack with laser orbs, and how many it shoots depends on the game's difficulty setting. The Proto Eye is actually less dangerous than a regular Big Eye, since it deals less damage, is vulnerable on all parts of its body, and makes slower, wider jumps all at the same height, although this is understandable since it is merely an introductory boss for beginners to learn the basics on.

BigEye appears as a virus in Mega Man Network Transmission. They act basically the same as the original enemies. 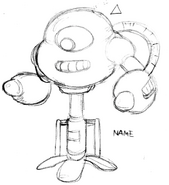 Early design of the Big Eye.

Concept art of Big Eye from Mega Man Powered Up. 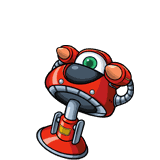 Big Eye in the first issue of the Mega Man comic series by Archie Comics. 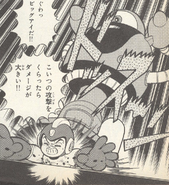 Big Eye in the Rockman manga. 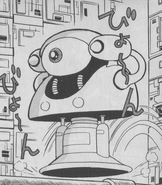 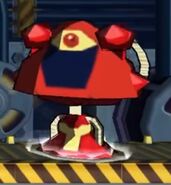 Enemies similar to the Big Eye.