Big Pets (ビッグペッツ, Biggu Pettsu) is an amusement park guide robot that was stolen and modified for combat by Dr. Wily, appearing as the boss of Wily Stage 1 from Mega Man 5. It shoots enemies from its head in varying patterns, and if a section of its body is shot, it launches toward Mega Man. Its eyes are the weak spot, and Crystal Eye is the best weapon to use, as well as a charged Mega Buster shots. Big Pets can only be harmed while its eyes are open.

Big Pets appears in the Rockman 5 manga and has a cameo appearance in Mega Man Megamix. 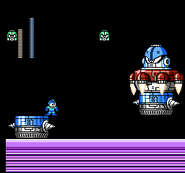 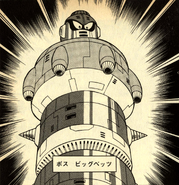 Big Pets in the Rockman 5 manga.
Add a photo to this gallery

Retrieved from "https://megaman.fandom.com/wiki/Big_Pets?oldid=330525"
Community content is available under CC-BY-SA unless otherwise noted.