Edward Glen
The Birdbots, known as Shitapper (シタッパー, Shitappā) in Japan, are several spiteful and two-faced bird-like beings from the Mega Man Legends series that work for the Loath Family (later Glyde Gang). Unlike the Servbots, which are faithful and caring to the Bonne family, the Birdbots are troublemakers who like complaining about others behind their backs. It's unknown how many Birdbots exist.

A few Birdbots are often seen with Glyde, and they appear as enemies in some missions. In Shala-Kun Ruins level 2 and 3, they throw bombs and fly in Finkel's direction to hit it. In Sart Farm they pilot machines like Pinguino and Megas Struthos to stop the Bonnes from getting money by stealing the animals, and Birdbots can be captured to be sold by 500 Zenny each. In the last mission, they appear with Pinguinos and Chorlinos, and normal Birdbots guard prison doors. In the casino, one Birdbot explains the rules of the games.

After Glyde and the other pirates learn about the four keys to the Mother Lode, the Birdbots attack Nino Island to obtain on of the keys. When Mega Man Volnutt goes to the island, the Flutter is mistaken to be an enemy airship and is damaged. The Guildmaster apologizes and says that after continuous attacks, the island's main cannon was damaged and they are defenseless. When the Birdbots return, the Guildmaster asks Mega Man to help them protect the island and buy time to repair their main defenses. The Birdbots attack by shooting or throwing bombs, and they pilot vehicles like the Glyde Drache, Zimmermann, and Mutti. Three Birdbots with different color act as commanders to the other Birdbots, one being green with a bandanna, one blue with an eye-patch, and one red with a mask. After most Birdbots are defeat, the three Birdbots attack Mega Man with their Glyde Drache Ace. After defeat, they retreat, but the Guildmaster knowns they will return and requests Mega Man to destroy Glyde's Base in Calbania Island.

After the base's destruction, Glyde says he is disappointed with the Birdbots and goes with them to Nino Island with their main ship, King Glydon. Roll Caskett suggests to use their secret weapon, the Parabola Gun, and she begins to repair it while Mega Man protects the island from King Glydon's attacks and buys time to Roll. Glyde loses his patience and decides to use King Glydon's most powerful weapon, the Ultimate Glyde Buster, but before they use it, Roll finishes the repairs and uses the Parabola Gun on the King Glydon, causing everyone inside to be confused and destroy their own airship. Birdbots are last seen in the Calinca continent, where a few of them and Glyde are inside the Gemeinschaft. 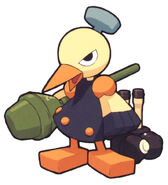 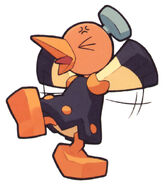 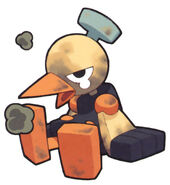 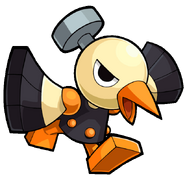 Birdbot in Street Fighter x All Capcom.
Add a photo to this gallery

Retrieved from "https://megaman.fandom.com/wiki/Birdbot?oldid=253039"
Community content is available under CC-BY-SA unless otherwise noted.