"It... It is not possible for you to contain so much power... The next time we meet the result shall be different!"
―Bit to X if he's defeated without his weaknesses, Mega Man X3

Bit, known as Vajurila FF (ヴァジュリーラＦＦ, Vajurīra FF) in Japan, is one of the members of the Nightmare Police, along with his partner Byte. He is sent to hunt X during the events of Mega Man X3.

Bit is a yellow Reploid of average height, being the smaller of the Nightmare Police. He possesses blue armor along his feet and hands, and his torso and head are adorned with orange swirls somewhat resembling magatamas. His face is mostly concealed by his helmet, save for his eyes, and he has two blue orbs on either side of his head. He wields a beam saber in battle with a red or purple blade. In promotional artwork he is shown wielding a tall blue shield, but he is never seen using it in-game.

Bit appears to have an arrogant personality. He enjoys combat and serves Dr. Doppler with unquestioning loyalty.[1] When he confronts X, he treats him affably and clarifies that he is following orders by hunting him. In the Japanese version, he also proudly announces that he has killed many Reploids for Doppler's sake. However, upon his defeat he is shocked by X's power and assures him that their next encounter will be different. In the Rockman X3 manga, he is notably more deranged and sadistic.

Bit and his partner, Byte, were both created by Dr. Doppler to protect Dopple Town as part of the Nightmare Police. His technical specifications were based on the most advanced Reploids of the time, built to fight with a balance of offense, defense, and speed.[2][3] The two served dutifully, until they joined the riots led by their creator along with the rest of the supposedly Maverick Virus-vaccinated Reploids.

Bit served as the right-hand-man of Dr. Doppler, issuing orders to the Mavericks of Dopple Town and directing their movement.[2] After X and Zero defeat the second of the eight Maverick bosses in Dopple Town, Dr. Doppler orders the Nightmare Police to capture X for him, alive if possible.

Bit randomly appears as a sub-boss in the third, fourth, or fifth Maverick stages X visits until he is defeated. If he is not defeated by using his weaknesses, he merely retreats, and X will have to face him and Byte again in the first Doppler stage in their combined form, Godkarmachine O Inary. If Bit is defeated with Frost Shield or Triad Thunder, he will be destroyed and won't reappear later. If only Bit or Byte survive, they will still be able to change into Godkarmachine O Inary without the other's presence. Regardless, Bit's fate is to be destroyed.

Bit, being the faster of the two members of the Nightmare Police, uses more agile attacks. He owns a large shield, but as it is heavy, he often chooses to give it up in order to make full use of his speed.[4] His simple pattern involves jumping and dashing with his beam saber, occasionally stopping to throw a paralyzing ring or a homing projectile - however, it is more difficult to maneuver than it may seem. Bit is weak to Frost Shield and Triad Thunder, which can outright destroy him if used as the finishing blow.

Bit appears as a boss of the story stage 9-6 in Mega Man X DiVE. His pattern is similar to his Mega Man X3 battle, but with Bit using his ring attack more often than his dash attack. He was also made a playable Hunter Program as part of the 2020 Christmas event, where he has access to most of his boss moves in addition to equippable weapons like the rest of the cast. This marks the first time Bit has ever been playable in a video game.

Christmas Bit, known as Saint Vajurila MC (セントヴァジュリーラMC, Sento Vajurīra MC) in Asia, is a Christmas themed version of Bit that appeared as a limited event skin and as a boss in the 2020 Christmas event. As a boss, his pattern is similar to his default version, except that he uses his shield to block frontal attacks and has Christmas enemies appearing to assist.

Bit and Byte are the Nightmare Police created by Dr. Doppler. In the manga, both of their bodies are made of thousands of small mechanical Worms made of chips that can turn Reploids into Mavericks.

Bit is first seen at the beginning of the riots in Dopple Town. He appears to Blast Hornet, offering him great power from Dr. Doppler before disabling him with his saber and taking him away.

Bit and Byte attack the Maverick Hunters' base and fight against Zero, Blast Hornet, Blizzard Buffalo, Tunnel Rhino and Neon Tiger, having the advantage in the battle despite being outnumbered. After X's recovery, he goes to the battle and destroys Bit's shield and arm with one charged shot. They decide to retreat after this.

After the defeat of the eight Maverick bosses, they make an announcement on Christmas Eve to challenge X and Zero. Bit and Byte manage to defeat them with ease, capturing and locking them into a powerful drilling machine that would kill them, showing it on a screen in Doppler Town. Dr. Cain and Marty went to the rescue, with Marty's pirates distracting Byte and several Mavericks while she goes to their location to give X the four power up chips found by the reformed Mavericks. Bit sees Marty approaching and confronts her, beating her nearly to death while mocking her attempt to save them and forcing her watch them die. As the drill above X's head begins to make contact, she escapes Bit's grasp and throws the chips to X in a last attempt to save him, and a large explosion occurs, Bit laughing and screaming "Merry Christmas" at X's supposed death. However, the explosion was caused by X, who gained his new armor thanks to the chips and destroyed the drills. X fires at Bit, causing heavy damage to him and destroying several Mavericks that were at distance with Byte. Seeing this, Byte returns to help Bit and Doppler appears with a dragon made of his chip worms. Byte asks Doppler to help Bit, but he makes his dragon attack with a powerful blast in the area X and the others were at, the attack hitting Bit, Byte and Zero, who didn't have time to avoid it. Damaged, Byte (holding Bit, who appears to be either unconscious or dead) asks Doppler to give them a chance to defeat X, and he drops several worms to combine them into Godkarmachine O Inary. Despite the power increase, none of their attacks work on X, and X takes down both Godkarmachine O Inary and Dr. Doppler's dragon with one shot. As a last attempt to defeat X, their remains merged into a giant two headed worm-like monster, but it collapsed before it could attack because of the damage they had received.

In the crossover Worlds Unite, Bit is one of the Mavericks revived by Sigma, being seen alongside Byte in Sonic the Hedgehog #274.

Bit was one of three Mavericks, alongside Vile MK-II and Return X, to be made into a model kit in Bandai's Mega Armor series. The three were originally released as an interchangeable armor conversion kit and later released as an independent model. The model kit features his shield, which can be attached to his back.

Bit was also released as a miniature in various toylines:Rockman Factory (packed with his shield and Blast Hornet in part 1 and Vile Mk-II/Goliath in part 3), Super Max Rockman, Mega Buster Pencil (Packed with Max Armor Mega Man X) and Battle Brusher. All of them were released only in Japan. 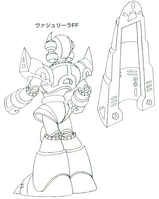 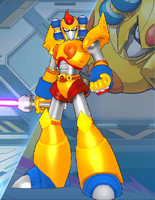 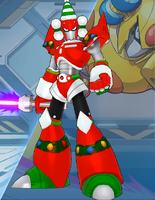 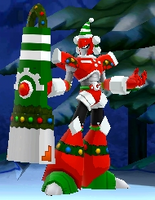 Christmas Bit with his shield 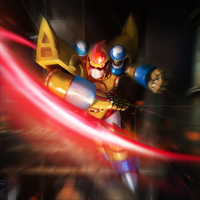 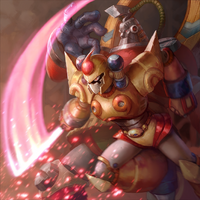 In the TEPPEN card Tag Team.

Bit in Tower of Saviors.

Illustration by Iwamoto Yoshihiro for Christmas 2005. 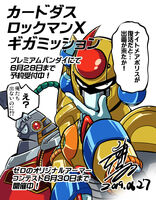 Illustration by Iwamoto Yoshihiro for the release of Rockman X Giga Mission.