Black Ace (ブラックエース, Black Ace) is one of two Finalized Noise Changes of Mega Man in Mega Man Star Force 3, the other being Red Joker. The basis for its creation was Acid Ace. It is exclusive to the Black Ace version, and its abilities and folder focuses on delivering multiple quick hits.

Possesses capabilities for data collection and analysis on par with those of Acid Ace, and is skilled at using its noise wings in aerial battle. Escaping his perfect maneuvers and incredible speed is nearly impossible, and only EM Wave Bodies attuned to noise through the Joker Program have a chance of withstanding his onslaughts. 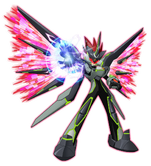 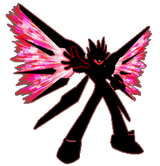