After completing Grand Prix mode and continuing to play in the same save, the message "Here comes a new challenger" may appear in the beginning of a race, with a member of the Black Troop challenging the player to a race. Racing against them is optional, but it is recommended to face them whenever they appear as it may take some time for them to return. Early victories will also make it easier to obtain the Extra Parts. When defeated, they give a gameplay hint and a panel with a question mark appears in one course. The first member to appear is Black Joe, followed by the Black 4 Roaders, Black Yellow Devil, and the whole Black Troop. The Black Troop won't appear again after their defeat.

Extra Parts (エクストラパーツ, Extra Parts) are secret vehicle parts that can be obtained after winning a race against the Black Troop. With each victory, a panel with a question mark will appear in a specific course. Taking the panel and winning the race will unlock the Extra Parts.

Note: When playing as Quick Man, Napalm Man, Ice Man, or Guts Man, the part that appears on their course will appear in the Crystal Course (Shadow Man).

Crystal Course location
Add a photo to this gallery 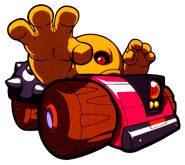 Black Yellow Devil
Add a photo to this gallery
Retrieved from "https://megaman.fandom.com/wiki/Black_Troop?oldid=269162"
Community content is available under CC-BY-SA unless otherwise noted.