Black Zero (ブラックゼロ, Burakku Zero), also known as ??? in Mega Man X8 and referred to as Nightshade Zero on the box of a figure by Jazwares, is an upgrade for Zero that appears in most of the Mega Man X series games. It is similar to X's Ultimate Armor in that it is usually accessible by a secret code, save for Mega Man X: Command Mission where it is used as his Hyper Mode. Except for Command Mission, this armor is never actually named in-game, and cannot be unequipped in Mega Man X4-X6 once received.

The effects of the Black Zero enhancement are not consistent throughout the games it appears in. In its first appearance in Mega Man X4, it is simply aesthetic and has no effect on his combat abilities. In Mega Man X5 and X6, it enhances his defense and saber power, and also adds 50% to Zero's weapon energy, like all of X's armors in these games do. However, three power-up parts will be automatically added for the black armor in both games, even if the player has not obtained them yet:

Refer to the table below for codes used to gain use of Black Zero. The codes are listed with the button pressed and the number of times pressed next to it. In Mega Man X4 and X5, highlight Zero on the Character Select screen and enter the codes. In Mega Man X6 and X8, highlight Game Start, complete the sequence of buttons, and press Start. While there is no way of knowing if the code is completed in X4 until the opening stage is accessed, in X5 and X6 a sound clip is heard if entered correctly, while a sound clip of Zero is used for X8.

"Sigma, you should have studied the blueprints closer! There is only one Zero!"
―Zero, after destroying his copy, Mega Man X2

The Black Zero armor is most likely a reference to the fake Zero that appeared briefly in Mega Man X2, where if X collected all three of Zero's parts from the X-Hunters, a Zero created by Sigma appears in the last stage, and Sigma tries to convince X that he is the real Zero. The fake Zero has the same black-hued armor as Black Zero, but with gray hair and a red forehead gem. He is destroyed by the real Zero shortly after his appearance. If the game is completed without collecting all of Zero's parts, a black Zero will appear after the credits and reveal the Capcom logo.

The fake Zero appeared as a secret boss in the game's mobile phone port, which was only released in Japan. After completing the game in Free Mode, he appears in the X-Hunter room from the Central Computer Stage in Ranking Mode. He fights in the same way as the original Zero, being only a palette swap. He teleports away after he's defeated.[1]

The false Zero also had a cameo appearance in Mega Man X5's opening scene, as the secret boss from the X Special World in Rockman Xover, and as one of the stamps in the manga cassette from Rockman X3 Buster Battle.

In the Rockman X2 manga, the X-Hunters successfully revive Zero after exhuming his inactive remains from an underground lab where Dr. Cain had stored him following his sacrifice in the first war against Sigma. In order to control him, the X-Hunters installed a Σ Chip within his helmet, which had the side effect of changing his armor black, resembling the fake Zero. Despite being under their control and looking to destroy X, Zero's rebellious personality still asserted itself, causing him to destroy Serges after being ordered to fight. Although Zero briefly managed to regain clarity during his fight with X, he soon returned to his brainwashed state, resuming the fight until X managed to destroy the Σ Chip, freeing him from Sigma's control and restoring his armor back to red.

Bandai released two versions of the black armor as part of its Mega Armor model kit series. The original release, a black-colored version of the Zero model kit, was packaged both as an individual figure and in a 4-armor "Double Impact" set along with a base body that included hot-purple limbs, a smirking face with red eyes, a green forehead gem, blue hair/saber parts and deep purple decals, a color scheme seen nowhere else. Other Black Zero armor was later released as an individual figure, featuring black limbs, a blue-eyed non-smirking face, brown hair/saber parts, as well as the original Zero model kit's silver and gold decals.

Jazwares released an action figure of Zero sporting the upgrade in 2004. It came in two sizes, and was referred to as "Nightshade Zero" on the box.

A black recolor of the "Zero Type 2" D-Arts figure was released in 2013 as a limited edition release. 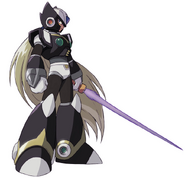 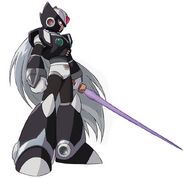 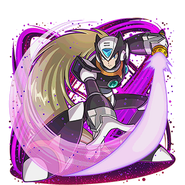 Black Zero in Tower of Saviors.

Sigma and the fake Zero card.